AND IN CONCLUSION, I'D LIKE TO ASK FORGIVENESS FOR MY CRIMES, AND BOOMER SOONER! Jeffrey Landrigan, a convicted murderer executed by lethal injection last night in Arizona, will leave this earth with his last words on record being "Boomer Sooner."

"I'd like to say 'thank you' to my family for being here and all of my friends," were Landrigan's final words, according to Marson. He concluded with "Boomer Sooner," a cheer often used by University of Oklahoma fans.

There is nothing we can add further to this story that can increase its content value. THAT HAPPENED. Mack Brown would laugh, but he simply can't find a way to be driven off this picture.

If you don't haunt the halls of certain local newspapers and their webernetical sites, you're really missing out. NewsOK.com not only has Berry Tramel doing video where he looks like the Muppet-Designed-To-Embody-The-Spirit-Of-Cirrhosis, they're also on top of the latest trend stories! (Insert jokes about states where people are missing teeth.) 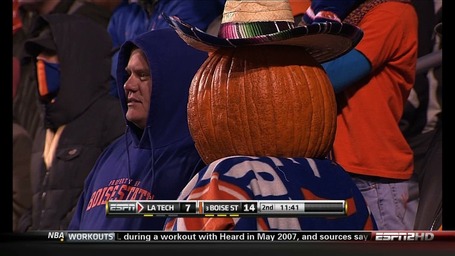 Boise State was a bit shaky at times in their Tuesday night matchup against Louisiana Tech, but let's grade them on several curves:

OBNUG seems more than happy with it, and they should be, especially if you saw the way Doug Martin ran the ball last night for a career high 150 yards.
*This looked like "pasties," which the words "community college" does have some strong associations with, now that you mention it.

WE'RE COACHING PASSING. I THINK WE ARE, AT LEAST. Overture! Hit the lights. This is it! Tonight's the night!

REPORTER: "Do you think the coaching has been good enough after four years with one, three with the other?"

...and ohhhh what heights we'll hiiiiiit/ On with the show/ This is iiiiiiit!

PERHAPS YOU SHOULD LISTEN TO MR. DELUCA AND HIS EXCELLENT GAMBLING ADVICE. Vegas is anything but sold on Michigan State, which may be the most clinical advice you'll get on a team that will be a sentimental favorite in most eyes after Mark Dantonio's return from a heart attack and the glossy, highlight-friendly finish against Notre Dame. Or is it all a trap to make you bet just the opposite way HMMMM? #vegasalwayswins

MARKEITH AMBLES SHOULD REALLY USE ICAL OR SOMETHING. Lane Kiffin has suspended him indefinitely for "lateness." Urban Meyer thinks this punishment is harsh.

AND BY YOUR WAR RECORD WE MEAN YOUR TIME ON THE NEBRASKA FOOTBALL TEAM. Don't ever, ever try to fudge your military record, son. And by that we do mean your time under General Osborne in the great campaigns of the 1979 and 1980 Big 8 Wars.