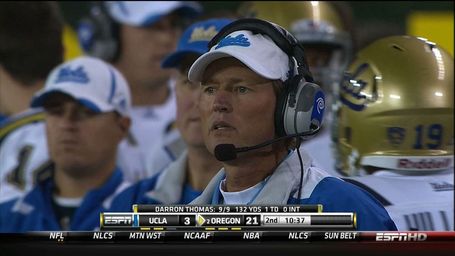 Clad in Illuminati riddles and leaving a trail of bodies in its wake, the Oregon offense tends to elicit this kind of helpless reaction from those who behold it in person. Oh, you think, "Hey, 32 first downs and 582 yards and sixty points: that sounds bad, but not 'my city was leveled by Mongols bad.'" Thinking is not knowing, and you can't really simulate the carnage from this kind of pillage. If this were a battle the crows would have grown so fat off the carcasses of UCLA last night they would have been unable to fly from the ground. (Pic via you know where.)

THE ECSTASY: Obliterates is the right word, and Darron Thomas was the detonator and timer on the assembly that exploded for three hours straight in Autzen Stadium. If we were an Oregon fan we'd just be flashing those hieroglyphics all day around campus and giggling at the thought of Rick Neuheisel, staring down the smoking barrel of a 39-3 cannon, deciding to combat the cannonade of the Oregon attack by kicking a field goal. GRAPE JOB, RICK.

THE AGONY: Speaking of that, Bruins Nation says conservatism is a losing strategy, though whether any strategy employed last night in that situation with that set of players on the road versus one of the best offenses in recent memory is a legitimate question whose answer is "No, you were doomed, you just had to choose the flavor of doomed." For the record, Neuheisel chose the Super Double Chocolate Doomfinger Doomed, a rich but not bold flavor that gets you blown out by 54 points.

SOME THINGS WILL NEVER CHANGE. The BCS is our best choice for determining a national champion, and we'll never have any other sensible way of determining a national champion. Ah, but don't you believe them. (Bubbaprog was up all night doing this. We only do professional at EDSBS, including the work of our commenters. Marcus Lattimore fits nicely into the lyrics, too.)

OH GOD CAM NEWTON PUMPKIN. That is the most horrifying jack-o-lantern we've ever seen, because it's both disturbing, and because it could average three yards a carry without the benefit of legs. (When you're done with it, there's only one true way to dispose of it: THROW IT OUT THE WINDOW MAN.)

DEAL OR NO DEAL OBVIOUSLY FLORIDA HAS ONLY ONE CHOICE. Garnet and Black Attack has the SEC's Deal or No Deal midseason review. Yes, we did choose poorly. [/stabs stranger just to feel alive.]

WE DO NOT ENDORSE THE USE OF BIG MEN ON SCOOTERS FOR ANY REASON. Not even for comedic purposes, since it only leads to sorrow and broken legs. Maryland students on hearing the news bought new fitteds, took to the streets in sweatshirts, and knocked the windows out of a few cars and set dumpsters on fire because, you know, it's Friday.