MAD WAGERIN', WEEK EIGHT: BAD ACTION HAPPENS TO US ALL

Share All sharing options for: MAD WAGERIN', WEEK EIGHT: BAD ACTION HAPPENS TO US ALL

4-1 last week, but I missed the big one because wishful thinking cuts both ways. I called it Badger Nation last week even though nobody wasn't laying the points with the Buckeyes. We went over this in Week 3 with Iowa/Arizona, and I want to think I could have only been so dumb with respect to the home team, to ignore that a Saturday of drinking and chasing losses at the sports book only ends in one place -- the weekly pull at the axis of the universe that's made at the end of every college football Saturday. Your more risk-averse friends were going out with or without you. You'd come so far already. You didn't have to give up on your impossible Friday night dreams yet. There was no way you weren't taking the Buckeyes -4 (4 points!). There was no way the universe wouldn't have spun off its hinge if the Buckeyes had managed to cover.

It either *is* gravity, or it's just as important. There's been a Turfman's Off-the-Strip Tannery and 49-cent-Prime Chophouse Saturday Night special every week this season:

Week 1: Nobody didn't have LSU covering 6.5 over the suspension-ravaged Tar Heels

Week 2: The Bad Action might have been worn out by nighttime here (it was a big Saturday), but any top-twenty team getting double digits is suspect in these waters (even if it was Penn St. at Alabama).

Week 3: Of course, Arizona had no chance against Iowa in the desert.

Week 4: Who wasn't taking the field goal with South Carolina at Auburn? Cincy (over Oklahoma) and Arizona St. (over Oregon) did work here as well.

Week 5: Stanford getting 8 points against anybody? What's your deal? Undefeated Florida, getting 10 points at Alabama? It's a rivalry game.

Week 6: Miami was rolling, favored by less than a touchdown at home against Florida State; Auburn by just 6 at Kentucky, too.

And so we had it last week with the Buckeyes at Wisconsin.

Year in and year out. It's the most compelling evidence of a metaphysical order that there is. And here we are again with top-ranked Oklahoma on Saturday night favored by a mere field goal over Missouri who hasn't played anybody and wasn't expected to do anything.

I generally try to avoid looking at the point spreads before I do some reading to get a feel for who I want to pick, and this week my chart was all lined up for Oklahoma, expecting them to be a 7 or 8 point favorite. The ideas included the following: 1) To get back at the Wishful Thinking influence (and get at the unlikelihood that #1 will fall for a third consecutive week); 2) That Oklahoma overlooked Utah State, and relatedly, Cincy was desperate for a win when they came close to upsetting the Sooners, who are on notice this week and saying all the right things; 3) That there's a good chance Oklahoma will be able to keep the ball away from Missouri on the ground; and 4) That there's a good chance that Mizzou QB Blaine Gabbert is focusing on the wrong things. Haters, for one, as it turns out "he's driven by the mantra: 'FEPWDM,' which means 'for every person whoever doubted me'" (also, anagram for DERP). And one expensive scouting service says Gabbert "clearly gets anxious in the pocket when his primary target is blanketed."

Which all sounds great until we find out that the Sooners are only three-point favorites on Saturday night. Knowing all we know about Saturday nights at the sports book, it's hard not to think that the only thing to do is take Mizzou and the points. But how many this Saturday night will do just that precisely because they're finally snakebitten by what's happened the first seven weeks, the lesson finally driven home by such shocking upsets of #1 in the two weeks before? How many have had their bankrolls completely wiped out by last week anyway? It's plenty for us to be sure that the pull on the universe's hinges this Saturday night will be something less than it was at the same time last week. And a good time to remember that if there's an immutable law of the sports book, it's that there is no immutable law of the sports book.

Here's the rest of this week's picks:

UCLA +25.5 over Oregon (5 units) (Thursday (TONIGHT!) 9:05 PM ET, ESPN): I want to say that 25+ points and a defense populated with two NFL first-rounders is usually enough for me, but I don't believe I've ever seen it before. Add that Oregon will be missing three starters on defense, that QB Darron Thomas's shoulder is injured, and that UCLA is coming off a bye week. How much are we supposed to miss Kevin Prince? Let's assume he'll be enough of a bro to share what he learned in his hotel room about the Pistol offense with backup Richard Brehaut. Has Oregon ever seen the Pistol? It's only Thursday, which is why we can get away with this one.

Oklahoma State +5.5 over Nebraska (3 units) (Saturday, 3:35 PM ET, ABC/ESPN): Admittedly, it will be hard for me to go against Dana Holgorsen in year 1 of the post-Leach era, but wasn't that a tough one for Nebraska last week? We probably shouldn't be surprised if the off-years for Oklahoma State aren't as off as they used to be. And why doesn't every team get a 27-year old quarterback? When does that ever not work? 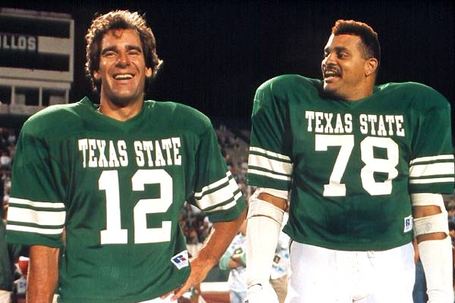 LSU +6.5 over Auburn (8 units) (Saturday, 3:35 PM ET, CBS): Sooo much Cam. Too much Cam. Another week for LSU to get comfortable with the two-quarterback thing, plus we get an invisible spy. Sometimes you just know a pick is a winner, and there's not a whole lot to say about it.

Georgia -4.5 over Kentucky (3 units) (Saturday, 7:30 PM ET, ESPN3): Aside from the Sparty 2010 BCS Bandwagon, Georgia's run for the SEC East title is the best thing going in football right now. What a thing the A.J. Green jersey thing is to have in the rear view mirror.

That's all for this week here. Hope everyone enjoys. I'll post a pick for Wisconsin/Iowa at my website by kickoff. Your feedback on these and the rest is necessary as always. Thanks.