FACTOR FIVE: UCLA AT OREGON (FOR THE EAST COAST FAN)

Share All sharing options for: FACTOR FIVE: UCLA AT OREGON (FOR THE EAST COAST FAN)

This is sponsored content brought to you this week by The East Coast Bias Foundation. The presenter this week is THE BIG Q of BIG Q AND THE MOOCH on drivetime on New Jersey's Sports Tap, 780 The FanTicket SportsMonster. 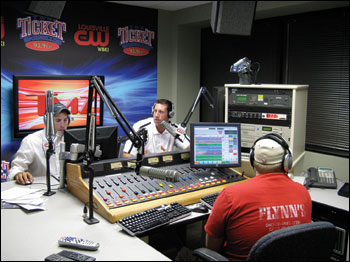 Welcome to the Factor Five this week, featuring the Oregon Ducks hosting a visit by the UCLA Bruins. Both of these teams are frauds stocked with clowns who play in the WACK-10. I call it the WACK-10 because it's wack. Also, it's a play on the name because it rhymes with Pac, which also kind of rhymes with crap, which is what this conference is. Let's see either of these teams survive in the Big East, and then we'll talk.

LET'S TALK ABOUT THIS MATCHUP AND THE POTENTIAL NFL PLAYERS IN IT.

So what's with Rick Neuheisel? Guy's a joke. A fraud. He's too busy working the office pool to recruit good players. Norm Chow's his offensive coordinator. He's probably too busy doing people's laundry on the side to coach. That's ethnic humor, and it's okay because I'm Italian.

If UCLA wants to win the game they're gonna have to give 110%. I'm serious: they can win this game. I'm not sure how, but it has to do with class and heart. UCLA's got heart. That's why they beat a gutless Texas team.

TEXAS IS GUTLESS. YOU HEARD ME. GUTLESS. I SAID IT AGAIN FOR EMPHASIS.

[46 seconds of dead air for emphasis.]

Oregon...sheesh. They're something. Really something. Just game-changers all around. LaMichael James? Game-changer. The Bills should draft him next year if he's around, which he won't be because THE GIANTS ARE GONNA TAKE THAT ALL DAY. I'd say the Bills should go get cancer, but they take it every year in the draft so I don't have to try and give it to them myself. It's like a cancer store for them, the draft.

ESPN hasn't told me who the other gamechangers here, so I don't know. But I know it's gonna be loud because the people in Oregon love their college football because they don't have a pro team. If they had one they'd know what hicks they were for liking it.

You'll notice this contained no numbers. If you want math you can go hang out with the baseball geeks and their whips and wars and their frilly panties and twenty-sided die. This is football, which is about heart and guts and not complaining, even if you get a concussion and shart yourself every time someone turns on a microwave. This is the NATIONAL FOOTBALL LEAGUE. Or its farm system, which we have to pay attention to so we can draft like a boss for fantasy next year.

This guy Kelly likes running up the score, too. Classless. No class whatsoever. No reason to rub it in.  You know who's really gonna benefit from this game in the end?

The New York Giants, that's who. Unless they draft Jonathan Franklin, the UCLA running back who coughs up his balls like Tiki Barber getting assraped in divorce court.

Category Two: Mascot. Never liked 'em. Never liked 'em. Got some fruity bear or something over there on the sideline. Guy inside it's probably a child molester who sits in a tollbooth all day. Gets off my running around in a plushie suit and pointing at things.

I mean, I got no problem with gay people. It's just your gayness I mind. Look at this. 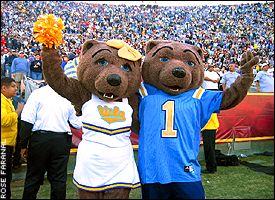 Stoned bears. Not needing that with my football, thank you very much. You know what I need with my football? NOTHING. It's football. I want to watch it where it should be watched: on my couch, in my house with six or twelve beers and me calling the referee a cold slice of shitmeat from the privacy of my house while I eat a hot pressed sub that I tipped some Dominican 5% to deliver to my door.

And you're not fooling anyone bear. I haven't seen a beard that lame since Gettysburg: The Movie. Put all the spirit gum on it you want but I know your favorite Madonna video is "Express Yourself," and not "Open Your Heart" which is the only possible answer a straight man can give.

Oregon's got some kind of pantsless Donald Duck. Donald Duck's miserable. You know who's miserable for me in a football game? Tom Coughlin. I love his misery. When i look down and see his chapped-ass face I know that he's seconds away from a cardiac infarction BECAUSE HE HATES HIS PLAYERS AS MUCH AS I HATE THEM. That's what football's all about, not this crap.

TOM COUGHLIN SHOULD BE FIRED AND HE IS A DISGRACE TO THIS FRANCHISE. 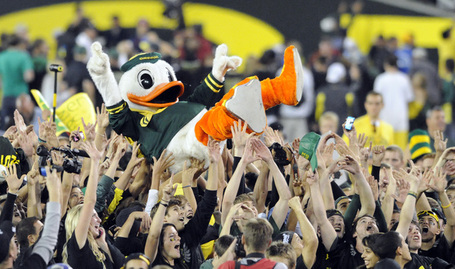 Aura? I don't even know what this means. Aura is a half-empty M&T bank stadium when waiting for the exhilaration of a 52 yard field goal at the half in Baltimore. Aura is watching a Philadelphia fan throw a dead child at a referee. Aura is THE PRO BOWL, PEOPLE. Aura is a girl at Scores my cousin dated, and had to break up with because she banged his brother. Who is me. Aura was a skank and stole my credit card and racked up fourteen large on cosmetic surgeries and bottle service.

ADVANTAGE: UCLA. I gotta be honest: this contest was over the minute I saw "Dickmann."

Grudges? Scores to settle? Sheer cussedness? They're both mad they don't play in a real league like THE ENN-EFF-ELL. That's something to be mad about. Also they have to deal with those West Coast girls who don't wear a lot of makeup or ladylike things and who sometimes try some shifty stuff in the sack, if you know what I mean. Had to tell Eileen from Pasadena that the Big Q was strictly exit-only in one department. I think you can read between the lines there. I'm talking about my ass.

SUMMARY JUDGMENT: This is clearly the New York Giants game to lose.