MARK MANGINO LAUGHS (HE TOLD YOU THE PROGRAM WOULD END UP DEAD LIKE YOUR BROTHER THE HEROIN JUNKIE.) 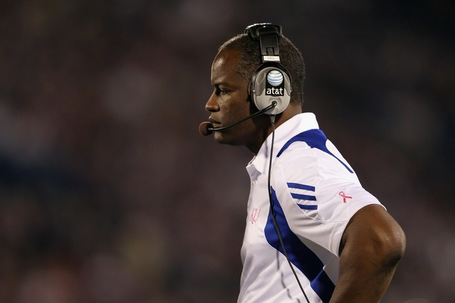 (Via The Agony of Defeat, one of the nifty tumblrs you should follow along with sbnation and roboshark.)

Kansas allowed Kansas State's backup qb to score a 51 yard TD while the Wildcats were trying to run the clock out last night. This is how a team loses 59-7 on their home field, and drops eleven of their last thirteen games as a program on the whole. Turner Gill's greatest ally at this point may be basketball season and apathy, which should give him enough cover for whatever ghastliness awaits them in the remainder of the schedule, as in Nebraska's impending Jack Pardee Niney Point Testicle Torture of the Jayhawks.

BJ DANIELS' FAVORITE AND BEST RECEIVER IS ON YOUR TEAM. We honestly don't think it's a matter of his ineptitude--BJ Daniels was bad at times, but he's throwing to players converted from other positions and behind a line of lummoxes who can run block all day but whose footwork and understanding of blitz pickup renders them as furniture. (Not even good furniture; we're talking, like, Rooms To Go Clearance shit.) South Florida has issues, but West Virginia was as clinical as they've ever looked under Bill Stewart last night. Did you just imagine Bill Stewart as a chuckling, lovable country doctor? "Bear pox? Durnit if you don't have it again. Well, apply this hook and lateraluntil you feel better, which should be immediately."

JESSE PALMER IS KIND OF A FRIEND OF DISASTER. He did anti-call BJ Daniels' disastrous pick before the half, though we would remind Dan Levy that running the spread set from the ten is fine because it's part of USF's base offense, and because a minute in college is an eternity. Craig James did not appear in the broadcast booth as a result of dying during the conditioning segment where he and Palmer ran the Mountaineers' sprint hill. RIP, Craig James. *

REMINDER: Randal Cobb is powered by cheesey biscuits, so wave them in the stands on Saturday in Lexington if you want to distract him effectively, South Carolina fans. South Carolina also has suggestions for you, namely that a new offensive coordinator has been named in Gainesville, and WHAT OMG--goddamn you, Google Reader and Garnet and Black Attack. Play with our hateheartstrings like that and then wonder why Randall Cobb had 500 yards of total offense following an EDSBS-sponsored pregame biscuit feast on Saturday.

DO NOT CONTACT THIS POSTER WITH OTHER OFFERS BUT IF THEY CAN MAKE IT HAPPEN DO ANYTHING IT TAKES INCLUDING SEX CASH AND DRUGS. Really, just email me and I'll make sure I'm home so you can pick him up. In the meantime, Alligator Army is gloomy in the q and a with For Whom The Cowbell Tolls, and we echo that while staring out the window and screaming about how no one loves you like we love you, Dan Mullen.** (Like Karen O: the tears are real and unfaked.)

JULIO JONES NEEDS NOT BOTH HANDS. We joke about him being overrated, but that's not his fault as much as it is the Alabama hyperbole machine's, which can't really top Jones likely playing receiver with a broken hand this weekend.

STOP THE GAYNESS, YOU PERSON WHO SAYS STOP THE GAYNESS. Butch Davis is banning his players from Twitter, both because they enjoy making fun of gay people, and because he wants to be the one who announces he's getting fired, not the players.

BARON BATCH IS A FORGIVING SOUL. We're all out there living and just trying to get better, man.

The Baron Batch Rule: If Will Smith can't do it, you don't stand a chance.

*Giving the people what they want, even if it's not true.