Welcome to this week's Factor Five Five Factor Preview for South Florida at West Virginia. The matchup between to Big East Powers--er, teams comes to you this week from Morgantown, West Virginia, a town what will be described thusly by the Boys Club announcing team assigned to this game.

Craig James: WOOO, those people are fired up! Kind of like how fired up I am that Tommy Tuberville has my son exactly zero catches on the year at Texas Tech despite throwing it around the yard like an epileptic pancake flipper!

Rece Davis: /dresses up as couch

/douses self in gasoline

The agony of watching Rece Davis cork forks, pad corners with foam covers, and cover the electrical plugs in the booth with James and Palmer will be mitigated by the generally passable nature of this matchup. As always, we base our call on five categories: nebulous stats, mascot, aura, names, and grudges. Enjoy? Enjoy.

South Florida stands at 3-2 in Skip Holtz's first year, but as with many teams in the first half of the season the win column is deep in junk bonds and uninspected trash commodities like SUNY-Stony Brook and FAU. (Forgive us, Schnelly.) Defensively they're 18th in the nation in total defense, disrupt the passing game with sound coverages, and can get a nice pass rush on when they feel like it. They've also played Syracuse and Florida as their big litmus tests, so also know that the challenges they've faced on defense have been somewhat easier than others.

In the Florida game, the heat and the size of Florida's line wore them down, two factors that will not be in play in Morgantown unless the whiskey vapor ignites. In that case, the explosion and resulting crater will be more important than any of our petty considerations of sport. The crater will be named "The Robert Byrd Memorial Crater and Toll Road," by the way, because this is West Virginia and that is what things get named there.

South Florida's passing offense has been crapulent. with BJ Daniels regressing from Grothe 2.0 last year to a pick-prone mess in a staggeringly short period of time. Daniels' line last week against Syracuse in a 13-9 defeat: 9/23, 0 TDs and 2 INTs, and 124 yards passing total. That's about where he is right now, so USF is leaning hard on the run game and platooning running backs Moise Plancher and Demetris Murray to some effect.  In sum: scoring is not their strong suit.

West Virginia's offense isn't blowing up any scoreboards anytime soon, but there are some bright spots despite the offensive line's tendency to block with only four men and turn the fifth loose in order to dance entertaining jigs for the crowd's amusement. Geno Smith, a first-year starter, has been efficient (19th in the nation), intelligent (only two picks,) and most importantly durable, taking a beating in the come-from-behind victory over Marshall and living through the LSU pass rush.

Noel Devine has been dinged, a term people like to use for "injured, but still so staggeringly talented he's good at 60% of playing capacity." Jock Sanders, Devine's doppelganger in the receiving corps, has been doing some running and pass-catching, while Tavon Austin manages to slide into the receiving rotation and be productive without violating the rule that West Virginia wide receivers stand under the height of 6'0".  The playcalling is random, but this is to be expected as offensive coordinator Jeff Mullen is a huge fan of the "Ask Corso" feature on the NCAA franchise of college football games.

Defensively West Virginia is still the same old Casteel attack on defense: sound against the run, porous against the pass, and may the lord save you if you try to read what's going on in its coverages. Just call four wide, all verticals, and see what you can do. More often than not this works quite well, though safety Robert Sands--even with a banged-up shoulder--is one of the few safeties in America capable of using his shoulder to knock your teeth through the back of your head.

West Virginia's mascot's praises have been sung here so many times it seems redundant, but to repeat: he wears what appears to be the freshly slaughtered skin of the deer, a dead raccoon on his head, carries a huge gun, and has a gigantic beard stolen off the face of a Mastodon fan. He is, at any moment, seconds away from shooting someone, skinning them, drying their meat to eat as jerky, using their skin as new clothes, and flossing after the meal with their ribs. Nothing about any of this is bad. 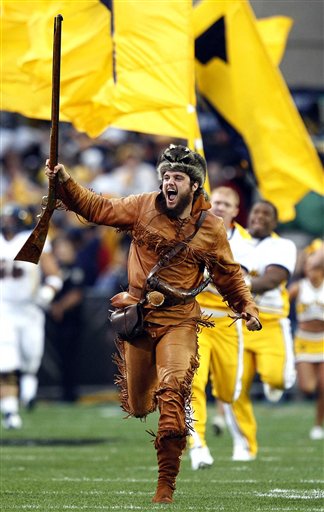 The South Florida mascot is just a bull crossed with Jim Leavitt's face, and always will be. 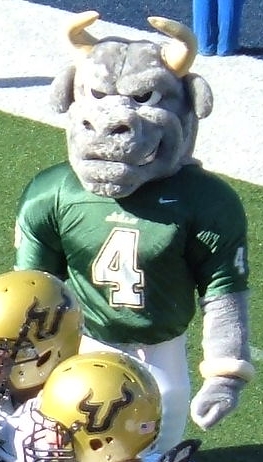 That might actually be Leavitt, sneaking into games in order to whisper coaching tips to the DBs. When he punches out a baby for lack of effort while breastfeeding in the stands, you'll know we were right.

CATEGORY THREE: Aura. Milan Puskar Stadium, at 60,000 in capacity and with artificial turf, certainly doesn't qualify as beautiful or intrinsically intimidating, but at night the ambient booze-dew and odd, high walls of the stands can make players feel like they're the "man" in some kind of backwoods "Man versus dog" event. The fans, when not having minor coronary events over Bill Stewart's in-game strategies or refusal to give Noel Devine the ball, get stinking drunk, loud, and belligerent enough to swear ear-scorching oaths in the direction of the opposition.  They also like to sing, proving along with English soccer fans that if sports fans all know one song to sing together they know ten, and after the first one they're all about fucking your mother, your sister, or both.

ADVANTAGE: SOUTH FLORIDA. It's not remotely close, since South Florida is a lost paradise of names so fake they sound like guests in the registry of the hotel that exists only in Steve Martin's mind. Sharly Azard is a real name, and he's on the bench here. WVU can't come close to USF's nominal lunacy.

CATEGORY FIVE: Grudges? Scores to settle? Sheer cussedness? In the indefinable realm of hoodoo, voodoo, curses, number-having, and other mojo past the last marker of human understanding, South Florida claims a certain contract on West Virginia's soul despite being knee-high to them in tradition and supposedly outmanned in the best of years. The advantage isn't staggering: the two teams have met five times with South Florida holding a 3-2 edge since their first meeting in 2005, so let's not overstate the Mountaineer headspace occupied by Jim Leavitt in a Chuck E. Cheese bull costume. Still, if anyone holds a psychological advantage here it is South Florida, since they have walked through the whiskey-scented valley of Morgantown and come out intact and unscorched by burning furniture of any variety.

SUMMARY JUDGMENT: 3-2, WEST VIRGINIA YOU'VE BEEN FACTOR'D! The Factor Five is 1-2 on the season after a two week hiatus, and as usual appears to be no better than random in determining the game's eventual outcome. Still, we suggest you double down on West Virginia covering and parlay it with the Rece Davis Breaking Into Tears option available at your local bookie.