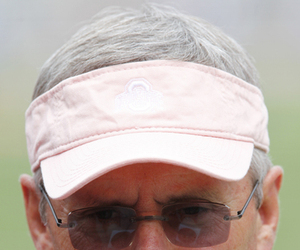 Composed, undefeated, and as unadorned and unchanging as his offenses, Jim Tressel's hair clearly leads the pack. Cut by a team of trained but affordable technicians at a Mexican place in Columbus our sources have identified as "El Cuts Mas Super," Tressel's silvery locks are as orderly and untouched by the turbulence in college football as the pubic mane of a Purdue student  on holiday is by other hands.  Pour water on it and it turns to a purple dust which may be used to clean helmets. It has already been Hurricane-tested up to one hundred and Jacory miles an hour, and is impervious to fads, changes, or any other quasi-socialist plots you care to send its way in an attempt to fluff it.

It requires no products to clean it, and only a functional Terrelle Pryor to keep it from being completely unmussed. Has curious, unexplained side effect of making all hanging pictures in a room come to exactly level for the entire duration of its presence, and is a leading candidate for Franklin County Selectman. We are trying to tell you Jim Tressel waxes and wanes from "Rock-Steady Icon" to "Stodgy Overgrown Bland High School Coach", and that right now in 2010 he is firmly in "Rock-Steady Icon" right now right down to the impenetrable senatorial coiffure. 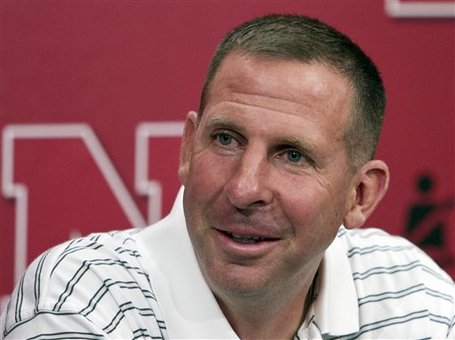 Neatly trimmed by placing head in an iron-smelting furnace for 20 seconds a night. The placing of the head in the furnace is for inspiration; the hair control is merely a pleasant side effect, because Bo Pelini is too busy chewing gum and kicking ass to pay attention.*  Unlike Rowdy Roddy Piper in They Live, Bo Pelini's shit is so together he not only brings enough gum for everyone, but is capable of doing both at once while calling complex zone blitzes. 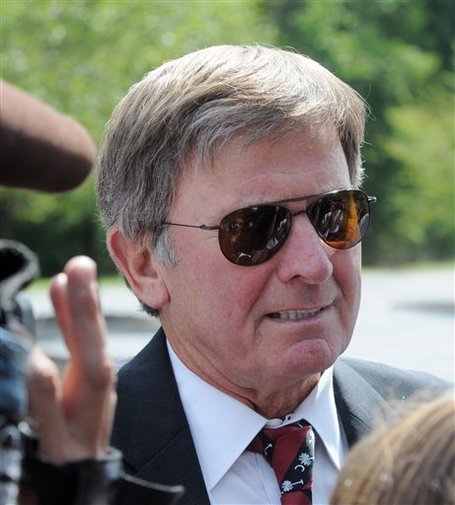 Trending upward since he broke his sponsorship deal with Just for Men and, as he did with Steven Garcia, just decided to let it loose and let fate have a chance with its destiny. Notable in its unmussedness; unlike Tressel or his spiritual hair forebear Jimmy Johnson, Spurrier's hair conditions are a direct reflection of his team's performance reflected via the body of their coach. Go watch the fourth quarter of last year's PapaJohns.com Bowl, and observe as a nearly bald Spurrier leaves a trail of brown hair behind him as he congratulates UConn coach Randy Edsall with a bald head. Do not laugh: defeat-based alopecia affects one out of every 16 coaches in the US, andsome cases are indeed tragic. 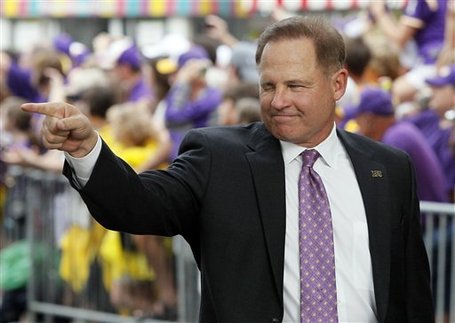 While usually covered with a great white LSU hat sewn from the skins of five albino basilisks, Les Miles does possess a surprisingly well-kept red/brown head of hair beneath that massive beanie of a baseball cap. It is trimmed every night by an enchanted unicorn that feeds only off his hair and Jordan Jefferson's toenails. You are not surprised by any of this and, with LSU somehow at 6-0, cannot be. 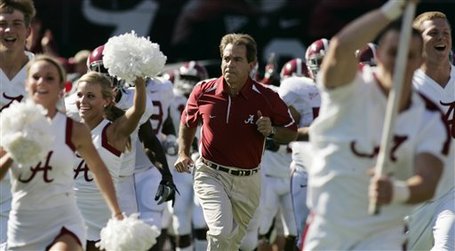 Please recall the previous lesson about some coaches' hair being an indicator of their emotional well-being, and then note the lift and untamed bounce of the hair Nick Saban shows, a sure sign that Alabama was doomed the instant they took the field in Columbia. His hair is almost a bird, and your argument is almost invalid if you don't remember that Alabama is still very much alive in both the SEC and the national title hunts as long as Saban takes the field without the frizz (and with a corner who can cover a simple fade route in man coverage.) 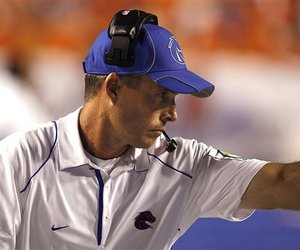 Has had baseball cap surgically attached to skull since 2004. Cap contains neural net capable of transmitting play calls and new formations directly to his quarterbacks and linemen wirelessly. Alas, it's all wires and Darth Vader scarring under there.