The Big Ten Network is on 24 hours a day, supplying you with all you could possibly crave in the way of vintage football classics (Purdue vs. Michigan 2004! Catch it at 1 a.m. in the morning!) and helping the insomniac sketchoids of the universe pass long lonely nights by broadcasting women's volleyball at odd hours. Herbert Albridge of Platteville, Wisconsin thanks you, BTN, with his pants around his pasty ankles.

The Big Ten Network's low production values have to make it an extremely profitable venture so long as they keep getting quality advertising like the Barbasol, who are currently blanketing the BTN with their new ad, "Close Shave: Barbasol." We now take a closer look at the ad frame by frame.

From the Pacific Coast... 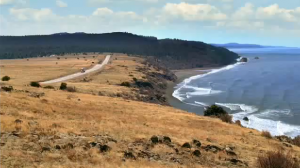 ...he rambles on, drinking a potent blend of gas station coffee, caffeine pills, cough syrup, and pure grain alcohol from a styrofoam cup he calls Bradford. Bradford is his only friend as he wanders the highways, lonely as a cloud and searching for the words to tell his wife he's been fired from his job. 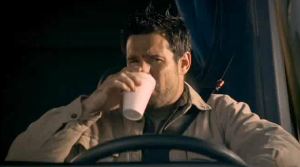 Bradford is a terrible GPS system, however. The man, growing ever hairier, cuts an erratic swath across our nation, blazing at high speed from the Rockies... 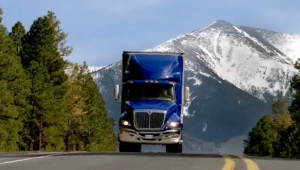 ...to the Heartland, where he terrifies farmers by barreling through fields without need for a road or sanity... 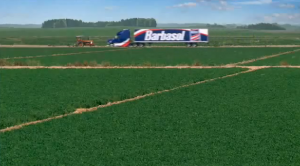 ...to the high desert, where he hallucinates the vision of a giant half-eagle, half-woman who chases him and his truck full of Barbasol across the mesas of Northern Arizona screaming the lyrics to "Roll To Me" by Del Amitri for hours on end. 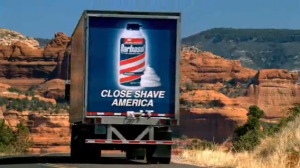 Close shave = "doesn't have a loaded gun, and be glad for it."

All the while he searches for meaning, finds none, and scratches his beard, both because he fails to grasp even a single skein of meaning from the great warp and woof of life, and because the methamphetamines make him twitchy and prone to irritating, repetitive gestures. 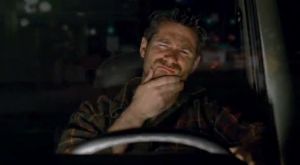 "I'm going to rub my face off and drive around like Ghost Rider!"

All the while there is an actual song that addresses all of this and no we are not kidding:

The song is clearly prejudiced against not only short Americans, but short and cowardly Americans with beards, something Barbasol will have to answer for as soon as short, cowardly enslaved Americans get up the courage to find a stool, get the phone off the counter where some tall bastard left it, and finally in a trembling voice call an attorney to file a defamation suit against Barbasol and their bigoted, pro-tall-brave-clean-shaven agenda. They'll get on that, too, just as soon as they get the courage. Here it comes. Yup. Any day now.

If you thought the age of advertising where America is addressed as a person in need of consumer products and nut shot videos, you are incorrect. It lives on in the Big Ten Network's commercial breaks, where you will be invited to taste the flavor of Lucky Strikes in the next three months at this rate, because once advertising begins to devolve there's no telling where it goes. Lucky Strike: it's toasted.

Back to the action: our bearded hero, now in day 16 of his meth-gorged bender, has now taken the following route across the United States. 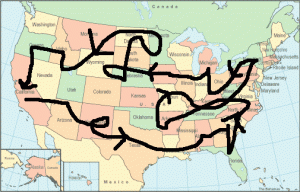 He returns home to his wife, who in order to deal with the stress of her husband leaving has adminstered powerful doses of antipsychotics to herself. You know this because he opens the door and is not immediately blown away by a shotgun-toting woman who has been wondering where her husband is for over two weeks. Lacking a sucking chest wound, he notices the can of shaving cream waiting with a note on it. 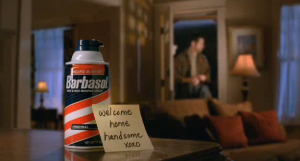 The Barbasol is laced with a powerful neurotoxin, of course, one completely undetectable to screens that will permeate through his skin and eventually kill him. Taking the bait, the man goes upstairs and shaves his shame-beard away, realizing both that he has been running from his problems, and that the goblin with a waistcoat and top hat addressing him in the mirror from over his shoulder is, yes, most likely a hallucination brought on by sleep deprivation and constant multiple-drug use. 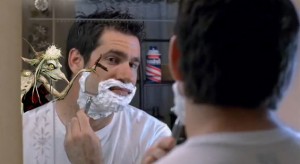 He then greets his wife, and notices she has made pancakes for the occasion. 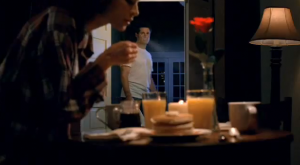 Tiny, shitty pancakes at that.

He thinks: pancakes. Kind of a shitty greeting for a man who's been out hard working on the road, even if it wasn't really "working" because he didn't get "paid for it," and also because he's "had hand sex with vagrants in rest stops." A man should have more than pancakes waiting for him, especially since they're her favorite food, not his. 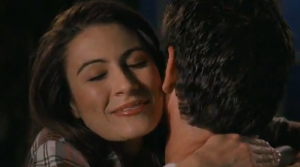 She embraces him. His extremities go numb, and he notices the shirt belongs to his best friend Steve, who is just the kind of dick who would bone a man's lady the minute he turns around, and hey is my heart slowing down, and---

Summary: A powerful, disturbing, and haunting portrait of one man's attempt to confront his own failure and the treachery that ultimately ends his life. Big Ten Network viewers should consider themselves lucky to have the privilege of watching this modern classic no fewer than seven times an hour. FIVE STARS ALL AROUND.