Share All sharing options for: LO! THE FULMER CUP BEGINNETH

It begins: The Fulmer Cup Season 2010 is now open. The theme? THE YEAR WE MAKE (ILLEGAL AND PROSECUTABLE) CONTACT. 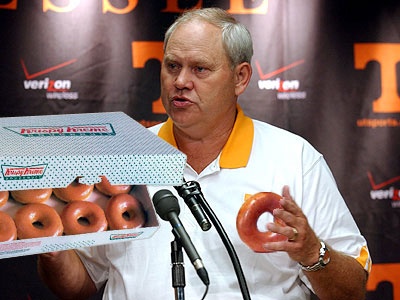 Pours out an entire bottle of Cheerwine for the dead homey Fulmer.

The SAS Wiki has become an unofficial but valued adjunct of EDSBS' efforts--now in our fourth year doing this--to categorize, classify, and tally the illicit behavior of college football athletes. Thus do we finally come up with a scientifically valid and indisputable record you may tote into message board discussion of "Who is most felonious?", and thus establish peace and logic on these internets forever.* The rules are posted over there, as is the Fulmer Cup Processing Station, an important repository of unawarded cases ready for processing by the Queen of Hearts, ourselves.

Queen of Hearts, btw, is both an Alice In Wonderland reference and a general rule to follow here. Bonus points are awarded as we see fit, and if you don't like it, off with your head. Additionally, we will exercise the right to reduce points on dismissed charges only if they're complete bullshit. For instance, Trent Pupello's Cup-winning charges last year were dismissed, but no one disputes his pistol-whipping several people in a parking lot. The points stand, and if you don't like it...well, you may speak with Monsieur Guillotine over there.

The first points awarded this year go to:

TIE: Notre Dame And Minnesota. Minnesota had a bar incident on New Year's Day, but the Fulmer Cup season for everyone begins the second the national title game ends, so the Gophers tie with the Irish for the kickoff points of the year.

Notre Dame's Michael Floyd was cited for underage drinking on January 8th, and thus earns one point for Notre Dame. Being blind drunk in Minnesota in January is the only way to cope, sure, but the points stand whether or not Minnesota is judged to be uninhabitable. Floyd fled the scene of a fight that drew police to the party in the first place, and admitted both to fighting with a Somali male at the party and to drinking. DON'T MESS WITH MOGADISHU.

The same fight also gave points to Floyd's teammate Shady Salamon, who earns one point for Minnesota. The Gophers also had two players nicked for underage drinking and punching security guards after their 14-13 loss to Iowa State in the Insight Bowl, but cannot count it due to the start date of the Fulmer Cup, and because losing to Iowa State does grant every player on the losing team one free misdemeanor each with a 24 hour expiry period.

We are the Pirates Who Cannot Handle Our Liquor. Carolina cops must be especially ticky-tacky, because picking up two drunk and slightly belligerent football players doesn't usually yield seven points. Ahoy, Fulmer Cup lead, though: cornerback Emanuel Davis and running back Brandon Jackson were drunk and hollerin' at 4:40 in the morning after a car accident of some sort in the parking lot. Then this happened:

A court record states Jackson was "unlawfully and willfully did appear intoxicated in a public place, the parking lot, Stratford Arms Apartments" on South Charles Boulevard on January 10, 2010 and "was disruptive in that the defendant did curse, shout at and rudely insult others."

We have no footage, but it had to look a bit like this:

Davis gets a disorderly and drunk (two points, one each,) but Jackson gets the full treatment of "being intoxicated and disruptive, resisting public officer, consuming alcohol by someone under 21, driving after consuming under the age of 21, and DWI." One point for each charge in the case gets seven points for ECU, which sounds like a lot until a Washington State player stages a three day standoff with ATF agents after his meth factory is raided and all hell breaks loose.