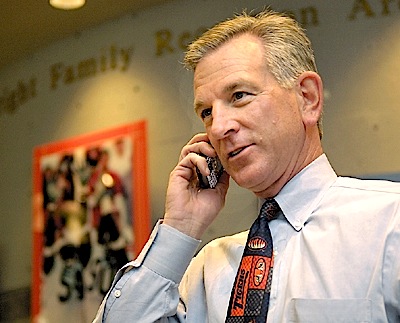 Tuberville: I want you all to know you're free to leave this room at any time.

Tuberville: I'm happy to take any questions you have at this time.

Reporter 1: Coach, you have some different ideas about offense than your predecessor did, certainly. What do you intend to do with the offense that has been the mainstay of Texas Tech's success?

Tuberville: Oh, well, I'm not a big numbers guy, but I'm certainly not gonna mess with what's not broken. The Air Raid offense isn't going anywhere. Wanna see how prepared I am? Look at this.

Tuberville: Now, this is a perfect example of the kind of stuff the offense runs right now. Not sure what all that is, but it certainly looks impressive with all the arrows and graphics. Now, this isn't too dissimilar from what we ran at Auburn, so what we'll be doing here won't be that much of a change.

Reporter Two: Do you have an example of that, coach?

Tuberville: I do. See, at Auburn we used Air Raid principles all the time. We'd spread 'em out by crushing them in, and try to find space in the defense that way.

Reporter One: Coach, doesn't that actually compact the space?

Tuberville: No. Look, we'd take these receivers, and bring 'em in, and put a fullback in there, and...voila!

Tuberville: No, it's the Air Raid. If the running back breaks two or three tackles, just look at 'em: WHOOSH! He's gone. In space. Air Raid, man.

Reporter One: Are you fucking with us?

Tuberville: But that's totally what we're going to run at least thirty times a game. Y'all know I don't need an offense. We need 22 points, boys, and we'll play football the way we always have. We'll hold the ball for as long as possible. If I have to take knees in the third quarter, I will. We'll get a safety or return a blocked extra point. Seriously, we'll make no attempt to score whatsoever. There's no telling what happens when you try to do that stuff.

I'll have a defensive lineman return a batted ball for a TD. Add in a couple of field goals, a coupon I clipped out good for 1.5 points in a Big 12 game from the Sunday paper, and possibly an accidental two-point conversion, and I promise you gentlemen: when we get to 22, we will not lose football games at Texas Tech.

Any other questions? If not, I'd like to remind players that their paychecks will be available--

A Texas Tech aide rushes over to him and begins hurriedly whispering in his ear.

Tuberville: Seriously? You guys don't do that here?