Share All sharing options for: ROLL TIDE: A TIME FOR MAKING SHORT STATUES 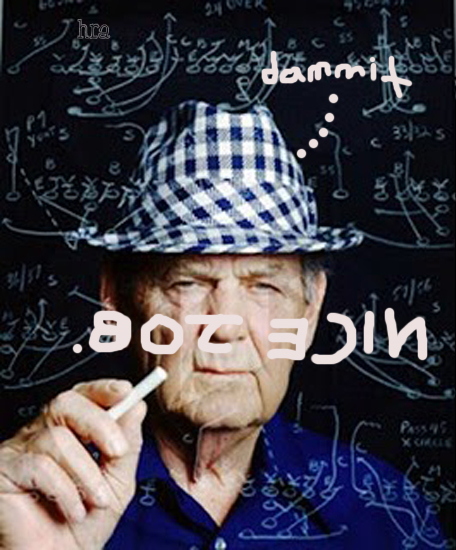 'S okay, Bear. We can read it. You're welcome for the Swindle Bump, Alabama: it may have been the crucial factor causing a fumble with three minutes left in the game, or the strange lubricant coating all Texas receivers' hands in the second half, or the phantom bit of force knocking something in Colt McCoy's shoulder loose. Either way, we expect barbecue nachos from the Houndstooth in Tuscaloosa in the mail, sent to our enemies so that when they open the package all hell is unleashed on their senses.

That said, do not neglect the context this occurred in tonight. This happened two season after this team lost to UL-Monroe at home. This happened with a Texas team that clawed back to within three points after the gut-punch of losing their best player. This happened after a long, arduous slog through the SEC and a slugfest with Virginia Tech to open the season. This happened in a game that turned into a rugby scrum in a hurry, and very nearly got away from a team with a 24-6 lead at one point.

They prevailed, though and all thanks to one man: Nick Saban, a diminutive bastard with a 300 page defensive manual and two national titles to his credit. The man builds big mean machines and does so quickly, justifying every dollar of the pile of lucre Alabama pays him to win football game. It came at the cost of Colt McCoy's dream game, of course, but football is in almost all cases an agonizing zero-sum game dependent on fragile human bones and even more fragile psyches.

For 18 years, Alabama's been contributing to the general glory fund in painful sums. Tonight they got to withdraw their share with proper dividends. Well done all around, sirs and madams. Go burn something, both because it's freezing tonight in Alabama, and because if there's one night you can get away with arson in Alabama, it would be the night Alabama survives for their thirteenth* national title.

*Or eight. Whatever. Count 'em how you like tonight. It's hard to do math when you're seeing triple.