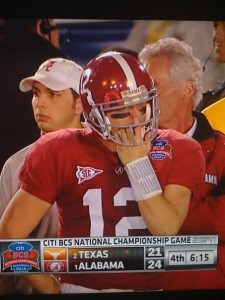 We're number one! We're number one! If Greg McElroy put another finger in his nose, he'd be holding up the number of passes he attempted on the night: 11. Jim Tressel isn't the only coach who doesn't need a quarterback to win (though McElroy was in fine enough operational form against Florida.) This mature photo brought to you by Brian.