CHAOS, WE TELL YOU

Share All sharing options for: CHAOS, WE TELL YOU

My goodness, things are flying sideways and on fire for day after the national title game. Captain Awesome, please come and help us clarify all this madness. 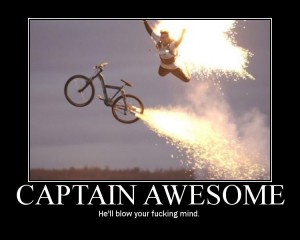 Help us, Captain Awesome. You're our only hope.

A report has determined that you are fiery, motivated, and sometimes liar-ish. The internal report conducted by USF shows that Leavitt lied on multiple occasions during the investigation and that other players saw Leavitt slap a player with an open hand. Lying always makes a situation worse, something GI Joe taught us in a special thirty second ad at the end of a cartoon once.

Alabama. Trophies. Wal-Mart. Yeah, that's happening. Life is so much better than you could write it, and that includes stories about graven images of tiny, fierce men.

The 3-4 comes to Gainesville. Or something like it, as Miami Dolphins assistant George Edwards comes to Gainesville while Chuck Heater gets the "co-DC" title. It's a system Florida fans should be familiar with, as the 2006 defense featured Strong co-calling plays with Greg Mattison. Edwards is a 3-4 guy schooled by, among other people, Nick Saban. (Cue crashing power chords, lightning, frightening music.) He's also played under Spurrier at Duke and was a GA under Spurrier in the 90s, so he's got the love and all until he coughts up a late lead.

Groh-mentum: You can't contain it, you can only hope to hire it. Georgia Tech defensive coordinator Dave Wommack is out after a season where Tech muddled along the bottom of the ACC's defensive rankings, and his replacement may bring only the kind of electricity you can get when you pay top dollar for a sweatshirt with cut-off sleeves: Al Groh. Mockable but effective, Groh is a good recruiter and always had good defenses at Virginia. He's also collecting money off his buyout that may or may not be voided due to taking a new job, so hold your excitement screw that Jackets-- AL FUCKIN' GROH! Let's see some titties and fireworks people! Streetlight! PeeepaaaaaawhoaaaohoAAAAHHHHHHHHHHHH!!!!

Treebeard like home. Arkansas' favorite Ent/qb is officially staying at Arkansas, meaning the Razorbacks will be officially horrifying on offense next year, and not in the way you'd like them to be as an opponent.

Bebe Bye Bye. Tech receiver is declaring for the draft, as is Joe McKnight.