A MISSIVE FROM THE REPRESENTATIVE FROM UZBUCKISTAN

Share All sharing options for: A MISSIVE FROM THE REPRESENTATIVE FROM UZBUCKISTAN

Good morning, bitches. You might say, "Oh, you're up mad early, Wayne!" There's a reason: the sun came out of my ass this morning and I'm farting sunshine, that's why. O-H!

I-FUCKING-O!!! First I get this kickass job at a call center, which has totally turned this rowdy Ohio Boy's life around. I've got a new PC, so the online game has totally stepped up, especially now that mom's quit being being a cheap bitch and has the cable modem poppin'. (Clan name: "PRYORBONERZ." It's not gay if it's TP!) The car's gotta wait until the cashflow steps up, but you gotta have priorities. 'Till then Wayne's riding with the little people on the bus and staying realer, man, except on Thursday when I drop my mom off and then Wayne's rolling like a baller with no collar to the call center.

But enough about me telling people they can't do shit once they buy their US Airways tickets. Okay, maybe one thing.

It's so awesome being a call center tech. I sit at a desk, pick up the fuckin' phone, and there's always some bitch like "I want to change my ticket funerals blah blah blah," and all I have to do is tell them to go online and do it, and they call back and I'm like "Did you do it online," and they're like, "It won't let me," and then Curt the guy across the room who does online is like, "I think we'll have to transfer you to reservations," and Curt and I do this for nine hours and CHA-CHING.

Twelve bucks an hour and they let me look at MILFhunter.com all day while owning bitches on MW2. CAMPERS LOOK OUT MY KNIFE IS STRONG.

But that's all secondary because Ohio State finally quit camping and went out and got some fucking heads in a bowl game, bitches. That's right, Oregon Fucks: you got 78 inches of pure Buckeye up your ass, and that's even with your jacked up weird vaginas trying to hide from huge duck penises. If they're evolving to escape well-hung dudes trying to get up on that, that explains Wayne's life, friends. They're scared of the realness, and their twats are all corkscrewed and locked up because they're afraid. Also, not having a car puts a serious lockdown on my python's killing power LOL OMG SAD it's all good.

It's been a dry spell, but Ohio State getting it wet in the Rob Rose Bowl--and that is the name now, bitches--totally makes up for the lack of nappy dugout Wayne's been experiencing lately. Seriously, WACK-10: Like you even though you had a chance against The Tress? Terrelle Pryor looked like one of those blue cat-warriors from Avatar, but without the pussy-ass bow and arrows. No, he had a big blue dick cannon that fired jizzbullets of victory instead of his arm. I lost count, but I think he threw it 70 times for 500 yard and 8 TDs. They didn't count them all because they felt sorry for you, and because of your WACK-10 refs fuckin' everything up.

And Doug Worthington? He loves your mother so much he let her out of the cage last night and brushed her. With the wire brush, the one she likes so much she pees herself. Seriously, he's a beast, dude, and he could have sex with my mom if he wanted to, though he wouldn't, because he's got loser-juice all over it from the work it put in on the Oregon offensive line. AND THEIR PLAY WAS OFFENSIVE.

No worries, though. Doug's immune to losing, and so is his dick, which is nine feet long. They have to boil it in a dairy where they pasteurize milk and shit in big containers. He just stands there and your mom scrubs it while a crowd of women clap. LOOK AT HIM: 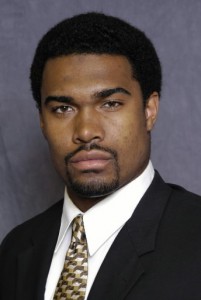 Hi. I'm awesome, and I fucked all your mothers.

He just wears a nametag that says "Your dad." Because he is.

I hate to say it, but Oregon, your quarterback sucked. I wanted to like him because he looked like a fat Jaguar Paw with a Troy Polamalu wig, and because I respect that kind of ethnic Juggalo look. (I'm not a Juggalo, but respect to all my Juggalo bros and hos. Seriously, no beef with you or the maggots. Y'all need to increase the peace between your peoples.) But he threw like bad Terrelle Pryor, the one we had out there as a decoy before we sent him to James Cameron, and he came back blue and invincible and with the dick-arm.

Same for that punching cheap-shot bitch, Blunt. Like he's not gonna weigh three bills in ten years and be working whatever crap the West Coast has instead of Skyline. It's the best shit in the world, and if Blount were lucky enough to come from Ohio I'd roll up in the pussy-colored Bentley I'm gonna have in 2020, make him take my order, and then smile and nod at him while I eat it in front of his fat hungry poor ass. Then I'll go home and shit into my platinum toilet for three hours, because THAT'S WHAT MAKES SKYLINE SO GOOD, BITCHES. It's a workout and and a meal and a diet all in one.

So yeah, we own the west coast now, and that's too bad unless you're on the victory wagon and the cart that trails behind it carrying Jim Tressel's five spare testicles. We'll start by moving all the hot bitches to Ohio, where they'll boost our employment numbers by becoming classy dancers and part-time lingerie models. Then we'll just start dumping all our sewage on Eugene, because taking a shit on them felt so good we're just gonna keep doing it. Finally we'll hold our nuts and wave to China, because when they see what the Buckeyes are working with below the waist in 2010 all the hot Asian chicks will start swimming just to get a taste. The strong ones will make it the whole way, but that's survival of the fittest.

I gotta go tell someone to go talk to Curt and rub one out in the restroom. Till next time remember that the name on the lease says Jim Tressel, you girlfriend is on the other line with TP, Boom Herron makes your dad clean your pool, Woody Hayes is kicking your grandfather's ass in hell and making him like it, and your girlfriend's favorite food is is the hot pork pants sausage THE Ohio State University serves up forever without condiments because it's so good it needs no ketchup, mayo, or whatnot.

-Subcommandante Wayne, Prime Minister and Leader of the Sovereign Nation of UzBuckistan

ps. If you have a line on a car, holla, but no foreign shit because I'm American and like my cars with balls, my football teams from Columbus, and my beer from a can. O-H!