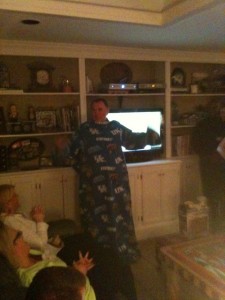 No frame today for the Index--strange computer issues.

So obviously the top story.

Rich Brooks probable retirement! Of course that's what we meant, so clearly the headline of the weekend after he announced that he was "80% sure" he was going to turn the program over to offensive coordinator Joker Phillips. Shame on Brooks for leaving the window open and displaying the kind of indecision a head coach never should. FOR SHAME WE SAY!

Um. There's no real end to the awkward possibilities here: either the best possibility given Meyer's resignation Saturday has come to pass, and he's staying, or our head coach when Meyer flakes and runs to the hills to be the world's hardest pottery teacher is Steve Addazio, and--

--well, that won't happen. Isn't that right, Crazy Old Testament God? HAHAHAH TOO BAD FOR YOU. According to crack sources, Florida recruits received gentle, indirect, and NCAA-legal reminders from rival schools about their coach's impending insanity, and how they might want to get with some serious stability. We're hoping by "gentle, indirect" they mean direct phone calls from Lane Kiffin during a dead period, which no Lane does not mean "Direct Easy Access Dialing" for the purposes of recruiting. (Though it would be a defense the NCAA would buy.) ("Darned acronyms.")

Because this will all end well /shines hara-kiri knife. The angles don't end: the detirement holds up the hiring of a defensive coordinator, shivs recruiting in the tender spot between ribs, and most importantly has no timeline whatsoever. Meyer's not even allowed in his office, which is presumably guarded by live alligators that stand on their hind legs and hold assault rifles in their fully functional hands.

This robot has learned to love. The oddest thing about all of this is the sudden humanity of Meyer. We began a voyage into the depths of space with our crew five years ago with an icy, logical, intense cyborg, and now, after many battles, we are living the science-fiction cliche of the robot taught to love, which is just awesome as a plot twist unless the robot also develops a near-crippling anxiety disorder in the midst of things as well, and begins weeping over a single, unspoiled rose standing in the middle of the battlefield as the lasers fly. Surprise! He's not only totally human in all the good ways, but also in all of the flaky, irreparable ways, too.

Your first mistake was assuming competence. Our favorite part of all of this is watching those who assume human behavior falls into some kind of pattern or justified path sort through the various scattered threads of Meyer's logic. "Why is this a matter of life or death 24 hours ago, and now it's not?" "Why did he say something, and then say something else?" "WHY DO HUMANS CONFUSE ME SO?" Because they make no sense whatsoever, are indecisive, and often conflate the little Enlightenment ideal of humanity in your head by acting like a pack of macaques playing with a box full of lit fireworks? Even the ones paid millions of dollars to do difficult, stressful jobs? Rephrase: especially the ones paid millions to do stressful jobs?

Shreveport, baby. Oh, and the Weed Eater Bowl is tonight, if you're interested and not trying to peel yourself off the ceiling.