THE MAACO LAS VEGAS BOWL PREVIEW: BECAUSE THERE'S NOTHING ELSE ON

Share All sharing options for: THE MAACO LAS VEGAS BOWL PREVIEW: BECAUSE THERE'S NOTHING ELSE ON

Hey, so OMG CAN I PLZ HAZ FOOTBALL TONIGHT? Yes, starving dog. The bone comes via the good people at Maaco, helping you fleece insurance companies for years, because yeah, my 2004 Mazda 5 did have the bass boat finish and a turbocharged custom sport engine package before my unfortunate accident, yes, why yes it did. /nodsfuriously

RANDOM IMAGE SUMMARIZING HOW THIS SHOULD END: If you're there and not Mormon, eating a cheeseburger on the floor shirtless in a drunken stupor. 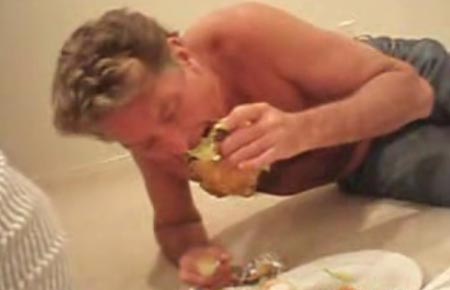 LOCATION: Las Vegas, Sam Boyd Stadium. Sam Boyd arrived in Las Vegas with $80 in cash in 1941 and would retire a millionaire and head of one of the largest gaming corporations in the world. This makes him the only person to ever arrive in Vegas with $80 and to leave up for the entire visit. BYU makes up half of the fans at this game, but Mormons like themselves some sneaky gambling, even if they're the ones drinking bottled water at the table. This means no serious cuts at the tables, though you should find reasonable deals at the mid-range casinos on Blackjack and the like. (WOO CASINO WAR!) Recession pricing, however, will be available at all whorehouses, Beaver fans. (get it get it hahahaha oh god the wolves are eating my brain.)

WE HAVE PERMISSIVE BEAVERS THAT SCORE ALL NIGHT LONG: BYU shouldn't stand a chance here, since Oregon State has faster skill players, has won five bowl games in a row, boasts a nicely balanced offense, and unlike BYU will not be taking their customary spot in a bowl game they have to regard as something like 13th regular season game.

Unfortunately, Oregon State has a clotting disorder rendering them incapable of stopping any and all bleeding. In the four losses for OSU this year they have allowed at least 36 points in three of them, most of it by politely pointing at the ball while it soared through the air towards opposing wide receivers, or occasionally while chivalrously giving the ol' heave-ho-and-go to ball carriers. Defensively this is not the spunky, highly ranked Beavers' squad you may be used to seeing, but something closer to what you might find in Eugene most years: a balanced offense that occasionally has to pack extra ammo to bail out the defense.

AN ANALYSIS NOT INCLUDING THE WORDS CAUCASIAN OR HOLY UNDERWEAR RE: BYU: BYU's Max Hall is third in the nation in passing efficiency, and is to credit for the high-water mark of the Cougars' season, the 14-13 upset of Oklahoma. He was also wretched when he faced pressure from Utah, Florida State, and TCU, but your first perk of the trip to Vegas will be facing an Oregon State team that only sacked the qb 1.25 times a game on average. Everyone's a winner! We flash our hands over the table to show no aces, only the numbers pointing to some operating time for Hall, and likely holes for Harvey Unga in the run game. On defense they don't exactly get after the ballcarrier/qb either, so bring yourself a nice Baghdad Sport Jacket, because we're going to a shootout tonight.

MEN WHO WILL BE SPEAKING OVER THIS GAME: Rece Davis, Lou Holtz, Mark May, and Todd Harris on sideline duty. These three will consume an overpriced meal at a steakhouse. They will call the game. Then Lou Holtz will put on his petticoat and go to bed, and may in fact don it just in time for the fourth quarter. (You best believe he wears a hairnet to bed. Keeps his brains in, ya know.)

PERKS OF A LEGAL NATURE. Players got fed on a buffet on Fremont Street called "The Outback Buffet Bowl," which looked kind of like the world's glitziest soup kitchen line when it was set up and rolling. Other than that and your standard tickets to Mystere that come complimentary with the room, not much: Sony gift suite, Fossil watch, New Era cap, Ogio Fugitive laptop pack, and Mandeee with three e's, who is a contractor not an employee, and can negotiate her own prices once you take the limo shuttle to the Ranch. < ---Oregon State only.

ON THAT LEAN, SON: We took Oregon State in the SB Nation bowl picks, but really that's only because of the Rodgers brothers. Both teams are tightly matched and slightly disappointed about where their season ended up, meaning we face a tussle of opposing cliches:

1. Cliche: The more focused team wins here. That would be BYU, since they've done this before and won't be distracted by most of the delightful, million-kilowatt sexiness surrounding them.

2. Cliche: "When it's third and ten, you can take the milk drinkers and I'll take the whiskey drinkers every time." Well, Max McGee thinks it's Oregon State here.

Advantage: Whiskey drinkers in a town where they have something to motivate them in the event of victory.