JOE PATERNO IS LIMBER OR BROKEN AT THE WAIST

Share All sharing options for: JOE PATERNO IS LIMBER OR BROKEN AT THE WAIST 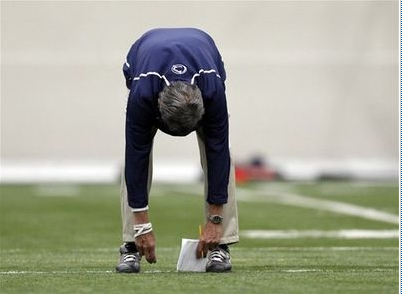 Hey, whaddya lookin' at. I see you, there's mirrors on my shoes just for this purpose. Walkin' along last night and my back just went like this. When you're four hundred and fifty-three this happens--er, "eighty-two." Yeah, that's what I meant. Eighty-two."

(HT: NESN.) In other Big Ten related imagery, Jim Delany is popping his suspenders, talking on his enormous cellphone, and pondering which team to add to this "sports-based cable television broadcasting syndicate" he's been working on for a while. Because we hold a Ph.D. from Wikipedia University, we know things, things like the growth rates for the Midwest and the states that the Big Ten is in. They're not good, particularly in Ohio and Michigan, two states gutted by the recession, but they're better than average in Kentucky, making Louisville a nice add from a growth perspective and from the dual strengths of its basketball and football programs. Pitt's still the favorite, but if one Big East team doesn't work out for expansion (now formally being looked into) then another one might work out just as well.

Or you could just start throwing out stupid shit at random, like the suggestions of Texas, Notre Dame, Central Michigan, Ohio and Memphis that have been mentioned elsewhere. (We're not linking to either of 'em.) That works pretty well, too.