Share All sharing options for: POORLY INTERPRETED EVENTS FROM THE OPENING ACT, 2009

USC's win at Ohio State. Ultimately an irrelevance for Ohio State (whose horrific gameplanning still deserves mention as one of the worst jobs ever done preparing for any challenge ever) and a false peek at hope for USC. Ohio State would recover to win the Big Ten, make the Rose Bowl, and ho-hum Tresselvania salutes their mundane fanged overlord who consistently drinks the unspicy, wholesome blood of his Big Ten victims. (Well, except for Purdue.) They'll lose to Oregon, and the Tressel Cycle that keeps the Ohio State ecosystem so vibrant and healthy will start again. 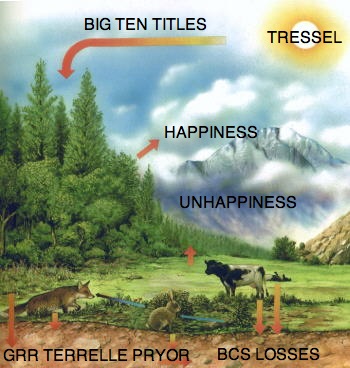 USC, meanwhile, would lose to Oregon, Washington, and Stanford, finish with offensive stats comparable to Northwestern's, and will be spending the holidays in El Paso dodging the Juarez Strangler and warning the locals not to look a wild Taylor Mays directly in the eyes. In retrospect, the victory meant little to USC in national terms because of their inability to win in conference, and little for Ohio State in terms of the dysfunction they showed on offense. Jim Tressel's been winning for years without a quarterback, and he'll be darned if he's going to start with that fanciness now.

Notre Dame's "So easy they can't fail" schedule/ The Michigan/ND Game. Universally cited by many (including this fine, faux-news site) as a reason Charlie Weis would get a pass for another year of unprosecuted felony theft, Notre Dame went on to lose to Navy, UConn, Stanford, and Pitt down the stretch, completing the death spiral beginning not with the loss to USC--a streak the Irish were at least used to--but in the week two loss to Michigan.

Tate Forcier's late heroics seemed both like the catalyst to The Rich Rodriguez Renaissance, something most people expected sooner rather than later, and the only thing keeping a powerful Notre Dame offense from winning a key rivalry game early in the year. Forcier, however, would spend the rest of the year running for his life and attempting to dig the Wolverines from the deep ditches the defense put them into time and time gain. This was the case in this game, too: remember that two deep incompletes called by Charlie Weis "to win the game" stopped the clock not once, but twice late. Forcier scored the game-winner with eleven seconds on the clock, eleven seconds that might not have been there if Charlie Weis didn't treat the college game with the unique respect usually reserved by wayward travelers for filthy truckstop bathroom seats.

The downfall of Weis began with his befuckwitted clock management down the stretch here, and if we'd all been watching a bit more carefully, the frustration of 2009 for Michigan would have been beyond apparent here, too. (Especially given the secondary's random waving at pass attempts and general confusion.)

Miami at Florida State. Easily the most thrilling game of the opening weekend's slate, and like most really thrilling things, completely misleading and in retrospect, a bit of a cheap high. Jacory Harris did look beautiful, but his beauty in this game (effortless deep throws, brilliant reads of the defense,) came against a Florida State defense currently sitting in 110th place in the nation in total defense and carrying the shovel it used to bury the Bobby Bowden era. Harris finished with 3,000 plus passing yards and a 23/17 INT ratio, but he looked like the second coming of Matt Leinart in this game, brimming with football bravado and an equivalent manbear charisma sure to impregnate women who dared brush too close to him. Two weeks later he was having a fascinating conversation with the soggy turf of Lane Stadium. Harris had a good year, but the effortless genius of this game was effortless because of the ease of moving the ball on the Seminoles, not because of Harris' innate perfection. (Which, to be fair Miami fan, still applies to his choice of pregame fashion.) 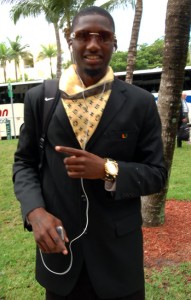 Still king of the pregame ascot.

Georgia at Oklahoma State. NINJA FAIL. You didn't know that Joe Cox couldn't play games in direct sunlight, and thus could not present even a feeble challenge to the Oklahoma State defense. You also didn't know not to bite the shiny, deceitful apple of betting on Oklahoma State to suddenly grow three sizes and start being a legitimate Big 12 title contender. You had no way of knowing how terrible Georgia's defense was this year, or that Oklahoma State only scoring 24 points on them was actually a sign that there would be deep trouble for Oklahoma State down the road, particularly versus Houston (where they ran out of bullets) and against Texas and Oklahoma (14 points and the shameful sombrero for the Cowboys' offense.)

We're a fool to do your dirty work, Mike Gundy, but we do it every time. See you again next year, when we'll happily swallow the hook you and T. Boone and a thousand points on offense against weak opponents tempt us again.