Share All sharing options for: PLAY A BOWL GAME IN A CRATER IF YOU WANT TO DO THIS THING RIGHT

Originally, this fine game of football we love and lose valuable months and years of our lives to was not played in fine stadiums built of only the choicest misappropriated monies taken from school budgets. No, before the days of luxury boxes and plush in-stadium brothels*, football was played on green fields and watched by spectators who stood perilously close to the action. They saw the game as it should be played: wherever the hell it can, sometimes on fields strewn with rusty barbed wire and glass, sometimes on fields likely strewn with cowshit and other animal droppings, and sometimes even in the middle of the Sistine Chapel! True story!**

In that vein, as you prepare to watch a slate of games played at disused stadiums in El Paso, Orlando, Shreveport, and other middle children of the American metropolitan family, consider the places where bowl games could be played in a truly spectacular, metalsome fashion.

El Paso's stadium may look like the Thunderdome with concession stands, but that's really just a half-step if you want real desolation.

Question: Where would the AIG Crater Bowl happen?

Answer: In A Goddamn Crater. 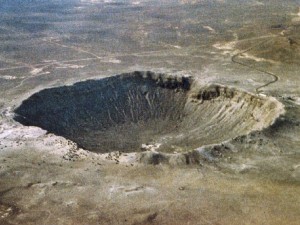 BANG-O: a crater. Seating: rocks. Field? None to speak of. Concessions? Whatever you can haul down on the burro, and possibly the burro itself if you come from a select group of fanbases. (LSU, WVU, and anyone else handy with animal slaughter and prep.) Bowl swag? NOTHING. Television coverage? Troublesome. Epicness: bursting at the seams and threatening to tear the very seams of the word itself, of course. Parking will be abundant at the top, since it's in the middle of Fuckall, Arizona and thus flat and empty as the soul of Dennis Franchione himself. Your bonus tweak for the game? Punt a ball out of the crater and your team gets two points and enough water to survive the trip out of the enormous hole a flaming ball of space dirt made in the earth. Oh, who loves the punter now, eh jockboys? /Zoltan'd

*You don't have one of these? Um, nevermind.