Bowl swag has to be the best indicator overall of a bowl's prestige/lack of prestige. Take the Emerald Bowl, aka The Chan Gailey Invitational, which this year features USC, and just one moment please. We have to check something right quick here. 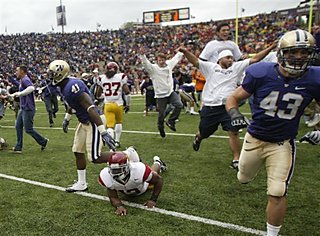 USC lost to Washington and is in the Emerald Bowl. Your argument is invalid.

Sorry. That feels so wrong to type "USC" and "Emerald Bowl," especially when all they're getting is a Fossil Watch, which is cool because they were interested in picking up middle schoolers from the 1990s, and a Fossil Watch will really help with that. Going to the Hawaii Bowl is really its own gift, but that comes at the cost of getting next to no swag whatsoever with only a Hawaiian print shirt for your effort. (If Noir Rich Brooks were running this, you'd get a broken bottle in the stomach for your efforts, and like it.)

The higher up the chain you go the better the swag gets, though that has its own variances. The Brut Sun Bowl gives you a hairdryer, the item getting our vote for the bowl swag most likely left at the hotel. (Along with a hundred sad Fossil watches littering the Holiday Inns of America's mid-sized cities.) The distribution of plentiful Best Buy gift certificates will have the unintended circumstances of at least one scholarship player getting kicked off the team for stealing another's newly purchased XBox or Playstation. Thanks, Best Buy. (Dicks.)

Canadians, not properly understanding football, are actually giving those who come to the International Bowl a..um..football. The BCS Bowls lead with the Sony Gift Suites, but even they insist on foisting watches and fleece caps, since fleece caps are apparently something bowl organizers assume the kids want, though the Fiesta Bowl just lists hat. One can hope for some creativity there.