FURTHER OFFLOADING OF THIS WEEKEND'S HALLUCINATIONS

Share All sharing options for: FURTHER OFFLOADING OF THIS WEEKEND'S HALLUCINATIONS

There's so much to offload from the weekend's bushel of observations and associated halllucinations. Like this, for example:

Kiffin said he was "pretty excited," which is good to know for future UT players within arm's reach of him during critical points in games. Those around Ed Orgeron's celebrations got it worse, though, especially in the case of running back Montario Hardesty. If you are interested, we have heard that Montario will be keeping his baby, and he will attempt a natural childbirth, and Ed will be a part of the child's life because he believes fathers should be around and involved like that. (Ed gets REALLY excited on the sidelines, if you didn't know.)

Orgeron's old employer, da U, will not support "The U", the documentary about the University of Miami's heyday. If you a reminder about why you should watch the debut on December 12th, we present the box score from the 1991 Cotton Bowl as evidence: 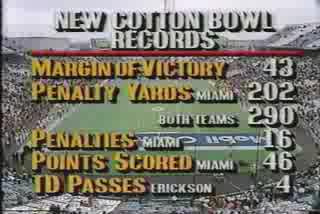