NOW, WAIT: WHO EXACTLY WILL BE TORTURED HERE?

Share All sharing options for: NOW, WAIT: WHO EXACTLY WILL BE TORTURED HERE?

We're spending the morning trying to think of a word starting with "X" and some half-assed way to tie it to something that happened this weekend in college football, but a quick note of great interest. When you hear it, we think some people should be very careful about what they say:

Now wait: who's getting the strappado, and who's getting the water torture? Because if these mean Skip Bayless gets a bag over the head, 18 hours of unairconditioned transport, and then days of sleep deprivation and waterboarding, we might be for this, especially since the BCS has been so good to Florida. 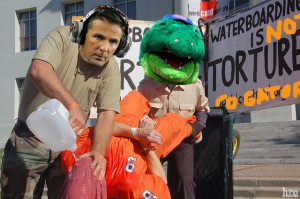 Shhh. Just say it's the best system for all involved and you can breathe again, sir.

Don't put Holtz under, though. He's uncrackable, and he'll just giggle and ask you when you're going to get the car battery, because he likes the way it tickles. Tim Brando, though, will require little more than a flight without snack service and adequate water before he starts singing your praises on the air. It's always the big tough-sounding ones that crack first.