ATHENS, AP--Uga VII, the bulldog mascot of the University of Georgia, has died after being shot over a disputed poker match on Thursday afternoon. He was pronounced dead on the scene.

Exclusive footage of the scene has been obtained by EDSBS.com. Uga is seen here in the lower portion of the picture on the side of the table closest to the viewer, and appears to have an ace clamped in his toes under the table. 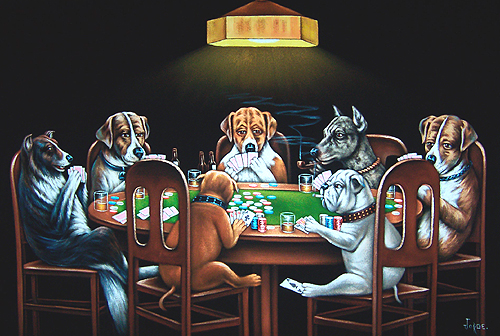 Details are still forthcoming, but eyewitnesses say an argument broke out over accusations of cheating during a regular lunchtime poker game between Uga and several local players he knew and played with frequently. Georgia fans were stunned at the announcement this afternoon. Speaking on conditions of anonymity, one source close to the program offered the following verdict:

"How we can lose a damn good dawg like this and still have Willie Martinez is...it's just...it's just not right."

Burial details have not been finalized, but an investigation is underway. If you recognize the St. Bernard in the far right corner, please contact the Clarke County Sherriff's Department. There are no suspects yet, but he looks like he's staring daggers through Uga, doesn't he?