Football used to be so much more...fatal. Frank Deford dusts off the fine year of 1905, when some 26 people were killed playing football in the era of the flying wedge, the legal shiv-block, and the "Paddy McDuffin" offense*, which was all the rage in its day. 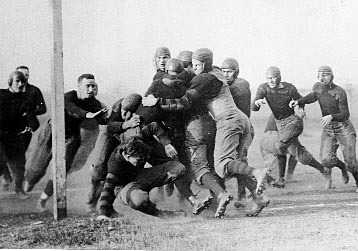 The article's mostly quotes, but it will make you thirst for a day when one could spin a fine carriage to a game with a syphilitic lassie, take a sip of sight-destroying Virginia rotgut, and soil one of the three pairs of pants you owned while watching the youth of America engage in the kind of bloodsport that made this nation strong.

Few players wore helmets, and a close observer declared that as Harvard and Yale pummeled each other, "It was the most magnificent sight ... every lineman's face was dripping with blood."

Since this does concern a team from the Boston area, we can only assume this was the reddest, most poetic blood ever and that no other blood has been bled so painfully or nobly from an athlete in any sport ever.

The old warrior called football a "barbarous amusement" that "develops the brute dormant in man's nature and puts the player on a level with ... a polar bear."

BUT POLAR BEARS ARE SO CUTE. Just like Brandon Spikes, who like a polar bear attempts to rip the face off first, then go for the innards. Should you think Mosby was a killjoy still chapped at losing the war of Northern Aggression, he did understand one key element of the game that has endured:

"It is notorious that football teams are largely composed of professional mercenaries who are hired to advertise colleges. Gate money is the valuable consideration."

*Similar to the Maryland Smokestack I, the Paddy McDuffin offense involved using a spinning fullback located just ahead of the quarterback. The fullback was equipped with a shotgun holding five shells, a blackjack, and a handful of lye mixed with sand, a concoction referred to as "Tiresias Powder" by the Crimson players on the 1904 squad. By rule, only rock salt was permitted as ammo, and headshots were frowned upon as "unsporting" and "Mexico-Spaniardlike in their ruthlessness.

In Harvard's variation, the fullback sometimes was equipped with a forerunner of the man-eating boerboel. The boerboel would be loosed on oncoming rusher to clear the way for the running back, and could execute several blocks on a single play. One infamous boerboel known as Achilles of Boot Hill devoured three Yale defenders including the son of Henry Cabot Lodge, who acknowledged his sadness at the incident but reflected that "If my son had to perish, let it be at the hands of a beast he can see, not at the unseen and icy hands of unnecessary foreign entanglements."

The Paddy McDuffin was outlawed in 1905 along with the Flying Wedges, though its chop-blocking techniques are still employed my many college teams including Auburn, Navy, and Georgia Tech.