A WORD FROM YOUR SPONSORS

Share All sharing options for: A WORD FROM YOUR SPONSORS

A brief review of the most persistent adwhoring in the commercial landscape for college football this year to date.

Bergwood and Ham/Vincent/Lyingbastardface we don't even know anymore. I don't even know who you are anymore, Bergwood and Ham. Or should we call you...Vincent, your real name, Mr. Dick Whitman-I-Blew-Up-A-Guy-In-Iraq-and-took-his-name? That may be a secret only your Allstate agent knows because he is blackmailing you, First Ham unveiled his real name and his marriage, something Bergwood seemed more than justifiably disturbed by ("I don't want to be your weekend lover, Ham,") then the two whistled past the graveyard of their relationship by cooking hamburgers off the smoking torso of Bobby Bowden (who says advertising doesn't offer effective metaphors for understanding the world?) and then finally...the death knell, and the hopeless attention-whoring by Bergwood as a final step to salvage the once-perfect marriage they shared built on Ham's lie of an identity. 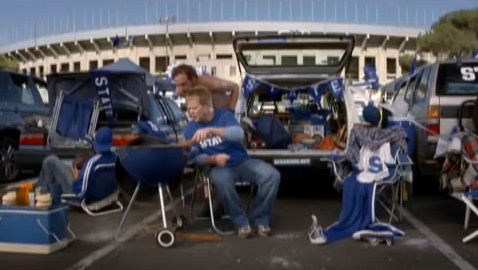 It's like my naked body doesn't even get your attention anymore, Ham.

Coldly poking at the hotter, fresher phallic symbols on the grill while ignoring Bergwood? Someone's laying on the symbolism a bit thick now, don't you think?

John Hancock Investments. Hey, swingin' boomers with the swinging axe of imminent death retirement hanging over your head! You're hep enough to IM your terror to your harried spouses in the middle of the workday instead of calling now. 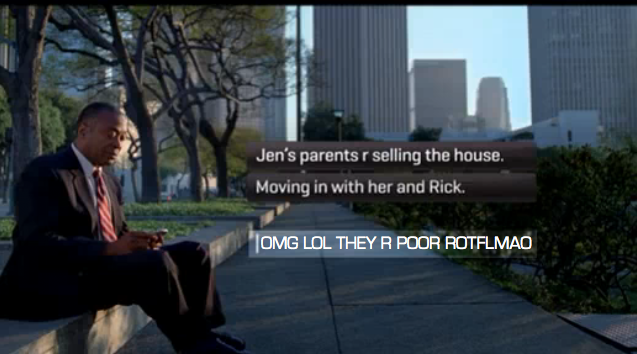 But honey what about our twin clawfoot bathtubs we watch sunset from? What about those? I WAS TOLD THERE WOULD BE TWIN CLAWFOOT BATHTUBS AND YOGA CLASSES!!! Apologies. Thanks to your profligacy and basic lack of math there will be no twin clawfoot bathtubs for anyone ever in the near future, baby boomers. . Bud Light in cans on the causeway--which you biked to not out of choice, but out of necessity--will do for sunset watching. Watch for stray dogs. They rule most of our cities now. We suggest you deal with retirement the way countless generations of Americans have dealt with it: by drinking yourself to death inexpensively. Fuck these commercials and their bogus IM anxiety in the ear forever with a tie-dyed dildo, since we all know these people are all on AIM anyway.

WHY YOU MESS WITH SASQUATCH? IF YOU REALLY WANT TO MESS WITH SASQUATCH, YOU CHANGE RATES OF RETURN ON INVESTMENT ON DEVELOPING NATIONS FUNDS POOR MAN! YOU NOT EVEN KNOW HOW WEALTHY SASQUATCH IS! SASQUATCH HANG IN WOODS AS PHILOSOPHICAL INQUIRY NOT NECESSITY! HAVE HOUSE ON STAR ISLAND AND A-FRAME IN ASPEN! JACK NICHOLSON OWN BEFORE SASQUATCH! SNORT COKE OFF ANJELICA HUSTON'S ASS ON OSCAR NIGHT ON DECK IN FRONT OF WHOLE PARTY TRUE STORY! SASQUATCH SAY HIS FUCK YOU MONEY LETS TINY TAUNTS FLOW OFF BACK LIKE WATER OFF FINE EXPENSIVE DESIGNER UNICORN LEATHER SATCHEL SASQUATCH CARRIES TO EXCLUSIVE PARTIES. 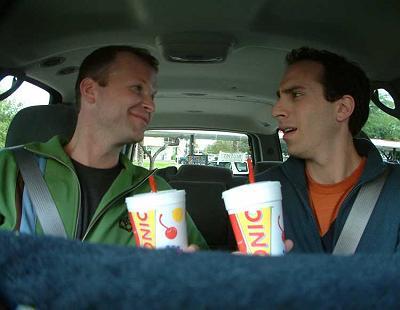 Clearly a franchise in decline like the Beatles post-Yoko, with the Yoko being the new woman in the new Sonic couple completely lacking the simmering sexual tension of bald guy and bargain-bin Geena Davis. They were always seconds away from ripping each others clothes off and covering each other in cherry limeade. Then they'd order a post-coital bag of cheesecake bites, and then cheerfully accept their 32nd arrest for public indecency after groinking each other in full view of the horrified families eating on either side of them. This is an easier charge to beat than the two guys' criminal complaint--Sonic's classic couple--who were clearly binging due to being as high as Rex Grossman in Cozumel and in need of some tots, pronto. The possession charge they will undoubtedly acquire won't be their first, but it won't be their last because only weed makes the silences of their subdivision more tolerable than the sweet embrace of death itself.

This is why we love these commercials: not for the witty banter, but for their depiction of childless, aimless, and aging suburbanites seeking succor through the only open window left in their lives: the car window at Sonic. Devastating, heart-rending work all around in its prime, but slipping somewhat.

Awfully complex for Bud Light drinkers: a mock-infomercial setup, a quick pace, and a complete lack of monkeys, disproportionately hot ladies dating cretins, and did we mention monkeys? Yes, let's mention that one twice. There are no monkeys or farting monkeys in this series of ads. From Ad Age:

Bud Light drinkers profile as lacking in carefulness. They are grounded like their Bud brethren, but respect authority. Bud Lighters can also have frat boy-like personalities, particularly when it comes to personal risk-taking. In regard to others, these good-time guys and gals are accepting of most everyone and generally easy to get along with.

Bud Light drinkers are also 48% more likely than the average person to play the lottery every day and 34% more likely to never buy organic products.

They could have just said "prone to using the word 'fag' a lot to describe anything" with the last sentence, but sure. This series of commercials sucks because the minute you see the words "Bud Light" you tune out because a.) you think Bud Light is made from the urine of retired circus animals, or b.) because you're confused by all the whatfortarnation goin' on with your commercial and WHARR ARE THE MONKEYS IN MAH BUD LITE COMMERCIAL, DANGIT?

Before we stab in an unfair unidirectional manner: ahem, craft beer drinkers:

This group is more likely to spend time thinking about beer rather than work. They are more open-minded than most people, seek out interesting and varied experiences and are intellectually curious. Craft-beer drinkers also skew as having a lower sense of responsibility—they don't stress about missed deadlines and tend to be happy-go-lucky about life.

We'd muse on this, but we're behind schedule and thinking about the last Fat Tire in the fridge. Mmm, Fat Tire.

Regional Hostage Situation: ROTEL AND THE BIG TEN. We haven't seen one of these because the day we pay for the Big Ten Network is the day we compliment Jim Delany's haircut and tact. The situation is reportedly a dire one, though. The Big Ten Network even has its own RoTel recipes page, confirming everything you've ever thought about generic Midwestern cuisine (i.e. that cheese is to any dish what explosions are to a Michael Bay movie.) This seems to be the least of it, though, according to Brian from MGoBlog

Orson: What commercials does Rotel run on the B10 network?

Brian Cook: They're batshit. In one of them, this crazy-haired guy bursts into a salon and desperately cries out for queso, so someone getting her hair done takes him to the back room where they have a huge cupboard full of rotel and velveeta. She makes the guy queso and feeds him a chip, which he accepts like Ewan McGregor taking a hit in Trainspotting. There is a second version where a woman does the same in a grocery store, except she 1) is begging for "quick meals" and 2) is wearing some crazy shirt with pockets all over it. The guy feeding the pocket lady looks like Dave Grohl in an alternate timeline where he's a child molester.

It's really dystopian, like there's some alternate universe where people just lurch from store to store looking for someone who can give them their rotel fix. Requiem for Diced Tomatoes. I can't believe they aren't on the internet.

Hopefully we can remedy this. In the meantime, cheese and diced tomatoe zombies will roam the dark hinterlands of our nation's heartland undocumented by the internets, spending cold nights in abandoned factories and their days barging into kitchens demanding "QUICK MEALS QUICK MEALS QUICK MEALS."