Welcome to our Factor Five Five Factor Preview of South Florida at Rutgers. The Factor Five Five Factor Preview examines the Thursday Night Game, the official death knell of any remaining productivity you may have had left in the tank for this week. This game will take place at Rutgers, the state university of New Jersey, a state more lush, diverse, and pleasant than any cheap stereotypes can possibly convey.

Let's all try to avoid doing that. Enjoy.

Category one: Nebulous Statistical Comparisons of Dubious Validity. South Florida has feasted on teams with no semblance of defense, and has feasted well.

The problem comes when the somewhat flimsy dentures serving as South Florida's offense must chew on tougher meat like the Cincy and Pitt defenses, and the BJ Daniels Sexplosion Attack fails to score more than 17 points. When this happens things get more lopsided than the final scores of their back-to-back losses to the Bearcats and the Wannstache would seem: USF was stopped on all five first half possessions against Pitt and trailed 31-7 at the half, while you may remember the Cincinnati game for a 72 yard dash Myron Pryor described as "sluggish:"

Collaros may have been a surprise for USF, but Pitt wasn't, and they still ran for over 200 yards on the Bulls, opening up the passing game for an efficient Bill Stull. So there you go get your run game going, establish play-action, and then there's a tidy four quarters, gentlemen.

We may have a case of the flammable man meeting the matchless arsonist, however. Rutgers has yet to find a new Ray Rice to run the kneecaps off of, and is seventh in the conference with 146 yards a game. The attack has been so lackluster they've built in their own Wildcat formation with Jabu Lovelace in the backfield, the WildLover, named that because anything with Jabu Lovelace involved is built for love and is inherently sexier than Christine Hendricks naked on a bearskin rug tossing hundred dollar bills into a roaring money-fire. That may be an exaggeration, but you're not the one named Jabu Lovelace, are you? True fact: half of all vaginas in New Jersey have "Jabu was here" written in sharpie on their back wall. The other fifty percent are waiting in line for the autograph.

Anyway, USF has the number one pass defense in the Big East, Rutgers depends on the pass, USF lives and dies off the rush and is facing a Rutgers defense that only allows 106 yards on the ground per game, and we're all at sixes and sevens here, now aren't we? When we have a push, we go to turnover margin, where Rutgers is +18 while USF sits at +5.

Category Two: Mascot: When someone tells us there's a guy with a fixed grin, beady, close-set eyes and a shirt with a scarlet "R" on it running around waving his arms willy-nilly outside, we assume someone's escaped the special ed school down the street, and that the secret behind the State of Georgia's Scarlet Letter-style labeling of the developmentally disabled is out in public for all to see. At Rutgers, it would refer to the mascot. 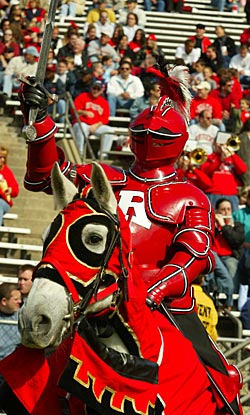 Impressive, as it involves a stunning horse and a sword. In a perfect world, he and the Mountaineer decide the overtime of games by fighting to a mortal wound at the 50 in front of a roaring crowd. It would work in Jersey or in Tampa, because both places are seconds from embracing bloodsport at any point and you know it. 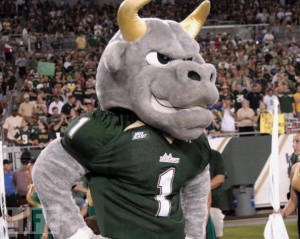 That's intimidating, but it certainly lacks the style of a guy clanking around the stadium in a full suit of armor.

Category Three: Aura. Rutgers brings a decent crowd, though the 56th playing of "For Whom The Bell Tolls" wears out even the most dedicated fan of doom and thundering power chords. Rutgers fans do chant "You got fucked up!" at injured players and flick off ESPN cameras, so they deserve credit for being just as cannibalistic as you might expect. 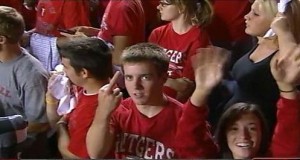 Oh, and Rutgers is 3-1 against them in the brief history of their rivalry.

Advantage: Rutgers. YOU GOTTA BE SHAKIN' THAT ASS.

Advantage: Rutgers. As tight a call as we've had all year, but Zaire Kitchen wins.

Grudges? Scores to settle? Sheer cussedness? Rutgers certainly needs the conference win more at 1-2 in conference, but otherwise we're looking at two 6-2 teams meeting for a matchup Rutgers usually wins. So, with the gearshift firmly stuck in MEH, we opt for the Scarlet Knights here.

EDSBS FACTOR FIVE FIVE FACTOR PREVIEW SUM: 5-0, RUTGERS You've Been Factor'd! The rare Factor Five sweep points to Rutgers, meaning USF should beat them by thirty on their own field tonight in one of the signature wins of the Jim Leavitt era.