WE'RE IN FOR TEN SHARES, PLEASE

Share All sharing options for: WE'RE IN FOR TEN SHARES, PLEASE

It's not much, but at the current prices for Florida we can't own so much as a blade of grass on Ben Hill Griffin, so Boise State it is for the official owned team of EDSBS.com.

For $100 per share, anyone can buy stock in the new corporation, and will have the ability to vote on a board of directors that will oversee and make decisions related to the school's athletics programs - including football and other programs. The initial share offering will be $20-million.

Money raised will go to facilities, not staff or coaches.

Boise State Broncos, Inc. will be modeled on a similar idea put forth by the Green Bay Packers of the NFL.

We're in for a grand to own a chunk of a team we've never even seen, and for an investment we can't be sure we'll ever see back. Talley-ho, American investing strategies! Some changes will have to be made if we are to have any input on the future of the franchise. 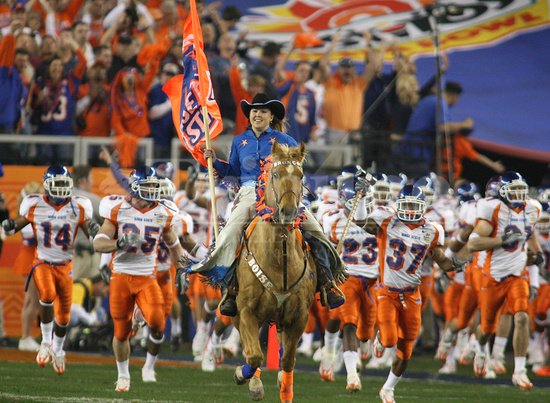 Out with this...bronco. In with the combat bear ridden by a man in a Master Chief outfit with a flamethrower.