Share All sharing options for: NOIR RICH BROOKS CONTEMPLATES THE MONTH OF NOVEMBER 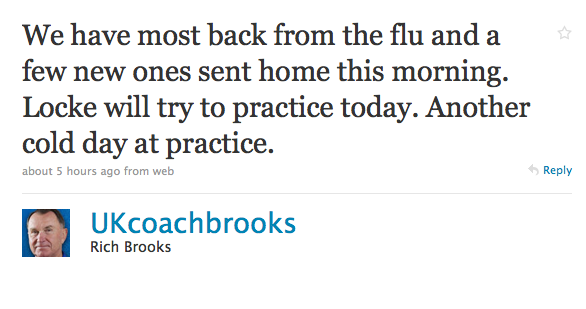 Another cold day, he thought. His breath snapped in front of him like a frozen ghost. It disappeared as quickly as a married woman leaving your bed: suddenly, and sure to return in a few sad, empty seconds. He'd been breathing for years. It didn't seem to help.

He thought about pouring a scotch. He poured a scotch.

Only drunks drank in the morning, he thought. Fine. I'm not a drunk, I'm thirsty. If the water happened to be brown you couldn't blame the thirsty man. He drank it. It warmed him a bit. It always did.

He then put on a clean shirt. If there was something scotch and a clean shirt could not fix he did not want to meet it.

Of course he had met something scotch and a clean shirt could not fix. She was as long an outrigger to the waist. Treacherous from the waist up if you were a tailor, but he wasn't carrying a tape measure and thread that night. She stood at the bar waiting for the world to spin around her. He was happy to fall into orbit.

"What's a lady like you doing in a pit like this?" He tried to look into her eyes when he said this. He failed.

"Waiting for the right tiger to fall into my trap."

Her voice purred like the motor of an Indian motorcycle, and the rest of her was just as dangerous. They danced into the Waikiki night. The band played luau, the bartender played rum down their throats as fast as they'd drink it, and her fingers played on the back of his neck as if to show exactly where she could break him if she chose. Dames like her were like pickpockets, keen on misdirection. She would go for his heart, not his neck. Like a good pickpocket he would be miles away before he noticed it was gone.

He would have left memory behind if he hadn't looked at himself in the mirror starting the car. The engine warmed up, and he ran a finger over the scar. That night a native decided to get restless. This one was handy with bottles. Normally he liked men who were handy with bottles, but only when they were pouring him the stuff to make him forget the nights, the broken hearts, the pain a man felt when he woke up alone, or with someone, or sometimes both.

This one was handy with a bottle the other way. He didn't like those as much.

The islander left a Honolulu Passport on his cheek for life. Only cost the islander a sock in the gut and a chair over his head. This seemed like a fair price even in wartime dollars. He spent that night in the hospital getting stitched up like an old baseball. She went home with a Dago named Sully. No one said beauty had taste or even needed it.

The window fogged up as he waited for the engine to warm up. Everyone has scars, he thought. Not everyone has memories. At least he had that...for now. It wouldn't be cold in Hawaii today, he thought. It never is, especially for sad men dreaming of blue skies streaming endlessly above the casket of grey clouds covering their limited days.

He pulled out of the driveway. He went to work. That was all there was to do.