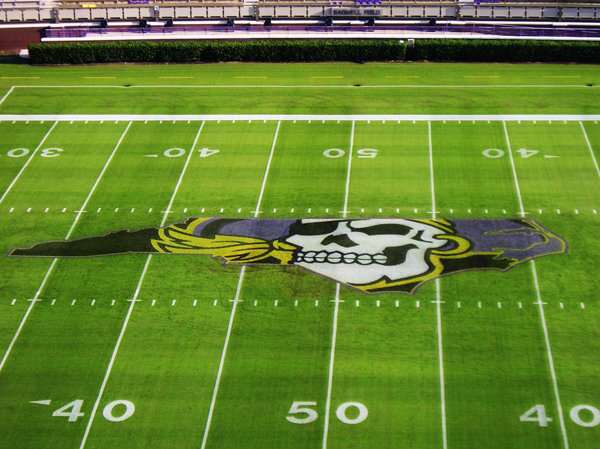 Category one: Nebulous Statistical Comparisons of Dubious Validity. Virginia Tech's offense has been better than its dismal usual this year for two reasons: the improved run blocking of the Hokies offensive line and the emergence of Ryan Williams, the freshman running back who enters the game with 930 yards rushing and 10 TDs.

If ECU allows 108 yards on the ground tonight ( a respectable average) then Williams will become yet another Hokie 1,000 yard rusher sometime around your third cocktail tonight. Be sure to toast him.

Of continuing and troubling concern to VPIUITAGMNAUCS--we think we got all the initials in there from VT's title--is the scattershot play of Tyrod Taylor, an extremely efficient passer at 12th in the nation but streaky to an extreme. Taylor can bail an entire game out in a single master stroke, or he can perform tidily when supported by the run game, but the one thing Taylor will not be in a game is the piece you build an offense around it. If the game comes down to him, you need a miracle, and he's already done that once this year against Nebraska.

Enter the reason ECU made such a nasty opponent for ECU last year: their quality rush defense, the principal quality turning ECU from speed bump into concrete wall for the Hokies. ECU held Noel Devine to 83 yards, and if you can do that to Ninjamountaindwarfman, you can do that to anyone.

The teams are remarkably similar in build and methodology, but if you have to go with anything, go with Tyrod Taylor's ability to, on one or two frenetic occasions in the game, reach between his two very talented cheeks and just pull something from his ass.

Advantage: Virginia Tech. Yes, we just bet on Tyrod Taylor. We ALSO like to live dangerously.

Category Two: Mascot: Dogfight of the year thus far for the Factor Five since there's much to admire about both mascots. The Hokie Bird is an endearingly goofy anthropomorphic turkey complete with flapping wattle and a fierce expression, and like all the best mascots no one is supposed to know their identity until graduation day. (We would bet a hundred dollars this claim is exaggerated and inexact, and that someone's had sex while wearing the mascot head, because that would be the first thing we'd do, because why the hell not?)

He loses points for being that guy in the gym. You know. Major Bonerpants on the bench press who needs a spot. 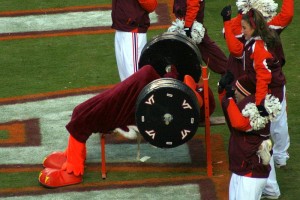 Hey...ladies...seriously, gonna need some help with this over here...

This is ECU's mascot. He is a pirate. 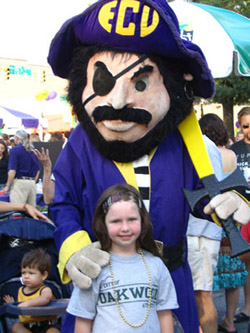 That's really his entire resume besides a resemblance to Edward Teach, aka Blackbeard, who was stabbed over twenty times and shot five before dying in a battle at sea. That and simply being a pirate is enough for us to make the judges signal in the direction of his corner for the win.

Category Three: Aura. Did we mention Pirate-Out? What was already ECU's highest profile game of the year just went through the roof aura-wise. It will also generate some of the clumsiest drunken requests for sodomy in the Greenville area late tonight because "Yarr that's what pirates would do." Pirates around the area will, for the most part, go home to give themselves a Jolly Rogering, and yup that's the end of our sexually themed pirate jokes. (NOTE PLEASE REMOVE HOOK HAND FIRST FOR BEST NON BLOODY RESULTS)

Advantage: This was over at NUBIAN PEAK.

Grudges? Scores to settle? Sheer cussedness? Virginia Tech certainly owes ECU for a 27-22 upset last year, so grudginess certainly has to go in favor of the Hokies. [Holds out hands in balance pose, leans back and forth.] Then again, ECU has pirates... Desire to avenge an embarrassing loss at home a year ago....pirates....need to bounce back from nutpunching loss to UNC....pirates. So yeah, that's totally advantage ECU um VT.

EDSBS FACTOR FIVE FIVE FACTOR PREVIEW SUM: 3-2, Virginia Tech You've Been Factor'd! Remember, this means bet the other way at your own risk.