Mickey Andrews will be retiring from his position as Florida State's defensive coordinator at season's end, ending an illustrious career spanning five decades and including two national championship defenses for the Seminoles.

An emotional Andrews made the announcement at the Orthopedic and Sports Surgery Convention of North Florida and Southern Alabama, where the longtime defensive stalwart and coaching icon was scheduled to receive a lifetime achievement award in Knee Surgery generation. Andrews was known not only for his hard hitting defenses, but for his defenses' ability to move the field of reconstructive surgery forward with new and ever-evolving variations of knee damage. 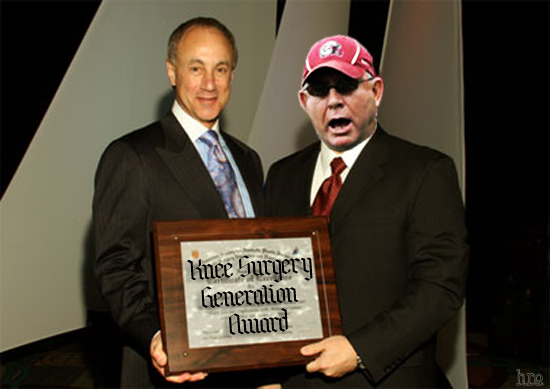 "I can't tell you how many different knees we had roll through here, but I could always tell which one's had Mickey's name all over it," said reconstructive surgery legend Dr. James Andrews of Birmingham. "They didn't just tear. By the time they got to me, it looked the way a truck tire had blown up in there, treads flapping and flying all over the place. I owe him a lake house or two, that's for sure."

Andrews' can claim a long list of NFL draftees developed under his supervision, including NFL legends Deion Sanders and Derek Brooks.

His hard-nosed defenses emphasized pressure and hard hitting in addition to imposing as much knee damage as possible in a single hit.

"It was always about fundamentals for Mickey," said fellow conference attendee Dr. Cal Wright of Mobile, Alabama. "His defenses weren't fancy, but they certainly put pressure on people and forced mistakes. They also accounted for 45% of all my surgeries from 1991-1999, and for that I certainly owe him. A more deserving man could not be chosen for this award."

Andrews will step down at the end of the season. His replacement has not been named yet, but a search is underway. When he leaves, he will leave a legacy of defensive brilliance unmatched in college football.

One thing he will not be short on is friends.

"Mickey is the best friend an old arthroscoper like myself ever had," said longtime Andrews fan and sports surgeon Alan Kemp of Atlanta, Georgia in his closing remarks. "Hardest I ever laughed in my career came when they brought in Scott Milanovich. One knee hangin' on by a few bloody shoestrings of ligament, the other completely gone. I ask what happened to 'em, and he says Andre Wadsworth took the other one and ate it right there in front of him. We all owe Mickey a lot, including the most important thing of all: the laughter only a good friend or traumatic knee injury can give you."