TIM TEBOW DISMISSES GEORGIA MATCHUP AS "AS MEANINGLESS AS ANY OTHER."

Share All sharing options for: TIM TEBOW DISMISSES GEORGIA MATCHUP AS "AS MEANINGLESS AS ANY OTHER."

Tim Tebow, clad in an ironic t-shirt reading "IRONIC T-SHIRT," announced that this year's Georgia-Florida game "won't be any different than any other time the two schools meet" during Florida's weekly press conference on Monday. 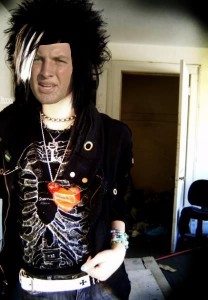 Appearing disinterested and unshaven, the star quarterback answered questions in a low mumble as reporters asked him about the upcoming matchup with historical rivals the Bulldogs.

"I don't really see how this matchup is any different from any other matchup between two groups of athletes from adjacent and arbitrarily drawn geographic regions. It's not going to be any more special, because football isn't special. Nothing is special. Not even love, which is a lie. A dirty, filthy lie."

"I mean that. Just another game, a meaningless distraction I put myself at the center of to keep the boredom away. I'm so numb even the thrill of violence doesn't do anything to me anymore.

You think it meant something because they danced on the endzone two years ago? How do you remember what happened two days ago, much less two years ago? Every day is the same: hours and minutes shot to pieces by time's arrow. I wish I cared enough to go on about how miserable this all makes me, but the only thing I hate more than explaining things to other people is listening to my own, despicable voice. Its the vanity of hate."

Tebow, who has struggled this season as a passer and has appeared to press at times when Florida moves into the redzone, said the offensive coaching staff was not to blame for Florida's scoring troubles.

"The staff isn't to blame. Not the staff that's here, anyway. It's not like they're going to be here next year, or you'll be here next year, or even tomorrow. You could die right now. My voice could be the last thing you hear. How do you live second to second knowing the last thing you would be doing wouldn't be looking into your child's eyes, or watching the grass wave in the wind, but holding up a tape recorder so you can catch the empty, meaningless waves of sound coming from my voicebox? You might already be dead. Ever thought of that? Huh?"

Urban Meyer attempted to interrupt on several occasions, only to be interrupted by long exhalations by the Heisman-winning senior quarterback.

Tebow also dismissed claims he was pressing and trying to hard to make things happen on the field.

"With our defense, I don't even really have to try. I don't have to be there. I could send in a body double. I could just take knees three times and then punt. Maybe I'll do that. I could. You could do anything at any second. I could go open a bakery. Spend the rest of my life making pies. Feeding people until they're so fat they can't see out of their little piggie eyes. AND THEY'D THANK ME FOR IT. THEY'D THANK ME FOR IT!!!"

"Hell is other people." He then shook his head, stayed silent for a moment, and left the room.