Share All sharing options for: CALEB STURGIS FOR HEISMAN 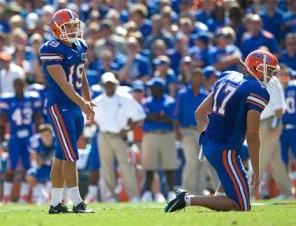 That leg! That charm! That musical Biblical name! The boys from Gainesville have found an electric new presence, a thunder-legged Legolas lasering long field goals lethally into the nets of Dixie's toodly-oodliest of football gin joints. No, his name ain't Ca-LEG, though you certainly think it could be from the way he uses it!

No, it's CALEB, a moniker sure to be used as the first name of choice for a thousand bouncing babes across the Sunshine State, since the St. Augustine Striker has the state buzzing with the latest fad in Florida football, THE THREE POINT SKIDOO or THREE THE FOOTSKI WAY, a real hoo-dilly more commonly known in the ol' rule book as "the field goal."

Sturgis made double sure that the next time he puts on the old glad rags and gets a wiggle on at his local juice joint he'll be crawling in Shebas by kicking THREE THREE POINT SKIDOOs tonight versus Mississippi State. What say you, nifty gypsy?

Sturgis, the St. Augustine Striker: "I'm glad I can help. I kick them when we can't score from the five yard line."

THAT'S RIGHT, YOU BIG SIX. It's the craze that's sweeping Florida football, daddy-o, and from the looks of it you'll have plenty more chances to THREE POINT SKIDOO your way into being Florida's most copacetic Heisman nominee this year. Dames: "He's the bees' knees!" Fellas: "He's quite a fella!" Offensive coordinator Steve Addazio: HURRRRRRRRRNNNNGGGGGHHHH WHERE'S MAH THINKIN' STICK HURGGGNNNNNGHHHH

From here at EDSBS Weekly: You're the bees knees', Caleb, and your crazy three-point dance has doing the lindy hop trying to keep up! GET HOT, GONE DADDY!!!

Florida's offense has reduced us to Jazz Age jibberish. We don't know what's going on, either, unless the idea was to feature Caleb Sturgis in this year's offense exclusively.