Dollar Bill Doug ups the ante yet again this week by picking picking BYU in a road game, going against the magic of Count Giggity, and assuming Al Groh will win a game you expect him to win. The sanity can be questioned; the daring, however, is undeniable. Enjoy this weeks' picks. 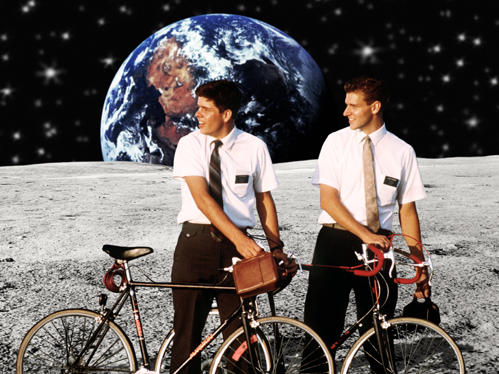 First of all, a mea culpa: My last three picks at Risk Level 1 -- i.e. the picks that are supposed to be as close to dead-solid locks as you'll find -- have all failed to cover (or, in Southern Miss's case, failed to win period, getting run out of Legion Field by a UAB squad that had never in its history tasted victory over the Golden Eagles). So while my immediate instinct is to pick a TCU win in this weekend's big Mountain West matchup, I have no choice but to suspect that my faith in the Horned Frogs might be, shall we say, misplaced. Reasons to pick the Cougars in this game? There are some: TCU's biggest strengths (a top-five defense and a running game currently bounding along at 225 yards per contest) match right up with BYU's (top-10 scoring offense and the MWC's second-best run defense). And the Horned Frogs' defensive status has been built on the backs of oppnents who all rank 70th or lower in D-IA in total offense. Yes, BYU does have to 'splain away that uuuugly loss to Florida State a month ago, but as reputation-besmirching marks go, "got nutpunched by FSU" vs. "Doug Gillett's gut instinct says you'll win easily" is a push at best. I'm going against my better judgment here, and recent history suggests you'd be well served by doing the same: Stormin' Mormons plus the points.

Last year's Hogs-Rebels matchup was one of the most anticipated in the SEC, with Captain Giggety assumed to be out for blood against the program that scorned him -- yet the Rebels had to survive a furious fourth-quarter comeback attempt by the Razorbacks just to win by two points. This year's Arkansas team is demonstrably superior to last year's on both sides of the ball, while Ole Miss has been markedly worse, particularly in the big games, averaging only 12 points a game in SEC play. There was a time earlier in the season when that wouldn't have mattered, as the Razorback defense was so bad it couldn't even keep Georgia from setting up temporary residence in the Arkansas end zone, perhaps for tax-shelter purposes. But the Hogs appear to have figured things out in a hurry on that side of the ball -- they've lassoed three of the nation's highest-octane offenses in consecutive weeks (Texas A&M, Auburn, and Florida) and pilfered nine fumbles in the process. That spells bad news for the struggling Ole Miss offense, and don't be fooled for a minute by Jevan Snead's surgical dismembering of the UAB pass defense, ranked dead last in Division I-A as of this writing. This has all the makings of a four-quarter slugfest, and don't be surprised to see Arkansas's promising run -- purchased from Satan with Bobby Petrino's mortal soul; I mean, come on, it was just sitting there -- continue with an upset victory in Oxford.

Or, the Shattered Dreams Bowl brought to you by Washington Mutual, Saturn Cars, and the Chicago 2016 Olympic bid committee. One of these teams just saw its season stiff-armed to the brink of oblivion with the loss of star QB Sam Bradford in a heartbreaking Red River Shootout defeat; the other bears the dubious distinction of being the one major-conference team Colorado's offense managed to score on (repeatedly). This will be another one of those classic cases of an unstoppable force meeting an immovable object -- or perhaps the reverse: Oklahoma's offense ground to a virtual standstill once Bradford got knocked out in the RRS, while Kansas's defense really hasn't stopped anyone in the last three weeks. But the Jayhawk defense is good at one thing, and that's putting opposing QBs on the turf -- they're tied for ninth in the nation with an average of 3.2 sacks per game. You will recognize this as a bad omen if you saw the extent to which OU's Landry Jones was running for his life in the backfield against Texas (and if only they could've factored the distance he covered into the Sooners' final rushing statistics, they might've ended up with more than -16 net yards on the ground). Four years ago, the Sooners limped into Lawrence in a similarly dire situation and re-animated their season with a convincing (if sloppy) victory; even if they win this weekend, though, the Sooners just don't have enough juice to put eight points' worth of distance between themselves and the Jayhawks. 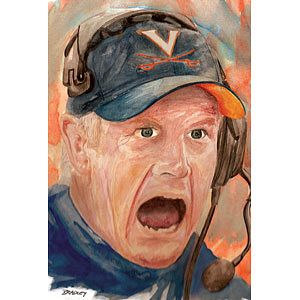 We've seen this story before, haven't we? Virginia opens the season with a loss so ugly it gets a TV-MA from the ratings board (for violence, adult language, and egregious insults to the concept of offensive football), spends the first few weeks of the season stinking on ice, and then suddenly Al Groh wakes up from his Ensure nap and starts throwing poo at people. The only thing scarier than the Cavaliers being 2-0 and in sole possession of first place in the ACC's Coastal Division is the fact that they're going to ride their drag-the-opponent-down-to-our-level strategy until it stops working, and that may not be for a while, even with 6-1 Georgia Tech next on the docket. The Yellow Jackets haven't beaten the Wahoos in Charlottesville since their national-title run in 1990 and are just 6-12 overall in that span, including two instances in which bowl-bound Tech teams got bitchmade by UVA squads headed for 5-7. Take the Cavs plus the points in this one -- and really, there are dumber ways to spend your money than picking them for the straight upset, because suckerpunching a team that's just had its ACC-title hopes revived is the kind of dick move that's right in Grumpy Groh's wheelhouse.

Stipulated: Vanderbilt is a shitty team this year, and not even "plucky, Bobby Johnson morally victoriously shitty" but rather the "I'm putting a tenner on the 'Dores finishing with negative net yardage shitty" of the mid-'90s. If you can't hold the Georgia running game, previously seen tripping over its own shadow against LSU and Tennessee, under 170 yards, you have problems that defy an easy fix. Such is Vandy's lot in life, and yet they have a two-year winning streak over Steve Freakin' Spurrier, which is the kind of thing that makes me wonder if God really isn't punishing him for being such a prick when he was with the Gators. There's very little that Vandy does well at this point, but they have put together a surprisingly stout pass defense, ranked third in the nation in yardage allowed and ninth in efficiency; that could be bad news for Stephen Garcia, who, after a promising start to the season, reverted back to Bad Old Pot-Smoking-Matthew-McConaughey-Influenced Stephen Garcia in last week's loss to Alabama. Like Virginia, Vandy has made a habit of ensuring that their particular musky failstank -- a pungent blend of penalties, errant passes, and randomly blown plays -- rubs off on their unsuspecting opponents; if they do the same to the Gamecocks, we'll have a game on our hands. A sloppy, unintentionally entertaining game, but a game nonetheless.