TESTING ONE MYTH RE: LSU FOOTBALL 2009

Share All sharing options for: TESTING ONE MYTH RE: LSU FOOTBALL 2009

Myth: Les Miles is doing it again! Getting whole term life insurance! Driving without a seatbelt! Going for it on 4th and a bajillion!

LSU is a program surrounded by a fog of mythos and mystery, with mythos being the Greek word for "pollution, the faint whiff of a fetid grease pit, bay leaves, and bourbon fumes." Spray this mixture into a Tiger household, and every member of the household instantly leaps to their feet and begins gyrating wildly, eating dirt, and talking about "the God Who Comes." By that, they mean a young 1985 Les Miles returning from the past to the present wearing a half-tucked Michigan shirt and looking rumple fresh from going for his fourth "conversion attempt" of the night with an Ann Arbor Betty. 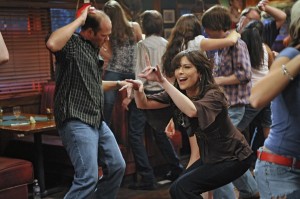 Les Miles is Mary Ann Forrester. He'd agree as long as he actually watched True Blood, and if you admitted he had a better ass.

If Saban was the architect who built the Mardi Gras float, decorated it, and then bolted the wheels on smoothly, Les Miles is the man who then took the float, loaded the thing up with boobs and beads, and took the wheel for a wobbly and occasionally irresponsibly fast and bumpy ride. Saban maintained a good steady level of total dickishness while at LSU; Miles, in contrast, is an engaging, gregarious sort happy to jaw with the media on a small level while shutting up on the big stage. (With notable and quotable exceptions.) Saban's brand of football, while effective, has the feel of someone killing someone for money; Miles, on the other hand, would be the kind of dashing rooftop chase scene where one opponent, down to their last bullet, kills the villain mid-monologue while clinging one-handed off the nose of a gargoyle. It's fun, but it will take years off your already bourbon and butter-shortened life.

LSU fans know what you're going to say: Les Miles was just winning with Saban's players, and woooo aren't you bullfucked now, sonny boy! To Miles' credit, he did not lose with Saban's players, winning 34 games in three years and winning the most bass-ackwards of all BCS titles, the 2007 National Championship where Miles went for 895 4th and shorts, made 895 of them, put his salary on black on a riverboat casino, doubled it, and then pointed a fully loaded Glock to his head, pulled the trigger, and giggled as the hammer clicked down harmlessly without firing.

He also had sex with a Snapper lawnmower on full blast just to prove a point. The blade on that thing was shredded.

It was that kind of year in 2007, but history only repeats itself as farce, not as duplicate.

Last year's LSU team could not defend itself against a stiff breeze, and suffered from Jarrett Lee's unending charity to opposing defenses no matter how many bizarre bets The Hat put on the table. This resulted in the demotion of defensive coaches and the hiring of John Chavis, former Tennessee coordinator, renowned SEC defensive mind, and Bulgarian customs inspector. When good, Chavis defenses bullrush the middle and strangle their opponents out of contention. When bad, they split like rotten fruit in the sun, give up gouts of points, and draw flies. There really isn't much middle ground there.

This year's LSU team is 5-0, a record attributable not so much to Les Miles' enormous and legendary testes (visible as two burning, luminous spheres venting macho gas like a refinery from passing planes in Baton Rouge) but to the ineptitude of their opponents. The resume thus far:

--Beat Washington 31-23 on the road in a game where they resembled a plate of hot ass, were outgained by 157 yards, out FD'd 25-17, and struggled to find any offensive identity.

--Relied on a Keiland Williams TD late to ice Vandy in a 23-9 nap game in Tiger Stadium.

--Had to beat Mississippi State at the goal line on a play where the pitch read was wide open.

To say LSU has gotten to a four spot in the AP poll by sheer moxie is to slap the concept of moxie in the face and throw her out of a moving vehicle. LSU is riding a hot streak at the tables like no one's business, but only has the ranking because a.) they won the BCS title two years ago, and b.) because no one else has managed to split twos and wind up with double blackjack like Les Miles. They could easily be 3-2 right now and 1-2 in the conference and taking on water, and that comes against some of the more anemic competition in the conference. When Jordan Jefferson and the misfiring offense take on Ole Miss, Auburn, and Alabama, shit will get real, and that "real-shit phase" of the schedule begins Saturday. 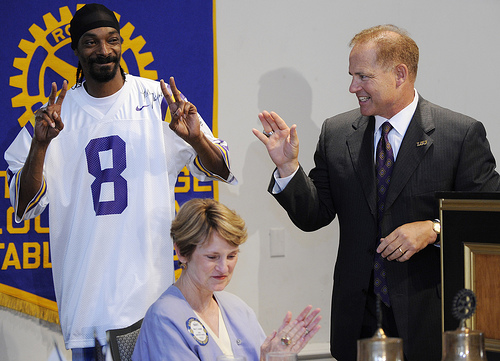 Preparing to drop it like it's hot in the heart of the schedule: Les Miles, seen here with a man with a smaller scrotum.

This all addresses LSU 2009 and Miles' role in their play with confused metaphors of gambling and lawn-tool sodomy. Discarding these for numbers, LSU is statistically as hot a mess as you'll find: tenth in the league in rushing offense, tenth in pass defense, last in kick returns despite having Trindon Holliday on the job, and dead last in scoring offense. They do steal other people's passes well (eight on the year, first in the league) and they punt and defend the run reasonably well. Other than that, they are Tennessee, but with balls, charm, latent talent, Terrance Toliver on the wing to stretch things out from time to time, and an offensive coordinator who hates doing things that work for more than two plays in a row.

The numbers leave you with the gap between their status as an undefeated and their mediocre evidence-based profile as a team. The difference, cliched as it may sound, really has been luck and composure. When pressed, LSU stays icy and plays better on thin margins than any other team in the SEC so far in 2009. The difference can only be attributed to the foolhardiness of letting the game stay close through the 4th quarter with LSU, and the giddy, carefree, and sometimes foolishly brave man at the wheel of the float, Les Miles. He may be winning with a full cast of own recruits for the first time, or he may be piling the whole float into a crowd of screaming partygoers with a Hurricane in hand. We're all along for the ride, and will either end up laughing from a balcony or getting crushed beneath its wheels.

Myth: confirmed. The testicularity is both real and spectacular (so far.) The bet would be to say that the streak will end when confronted with a quality opponent like Florida. Les Miles is slapping his mortgage down on the table and calling your bluff, mister.