RISK LEVEL 1: Sneaking into a second movie after the movie you bought a ticket for ends
Indiana +7 at Virginia, 3:30 p.m. Saturday
Oddsmakers usually aren't the type to fall in love quickly, but that seems to be what's going on here: Virginia takes on a UNC team whose offense has barely gotten untracked all season, wins a hideous game, and now all of a sudden Al Groh is a touchdown favorite over somebody. I bet the guy who set the line for this game is the type who thinks the stripper is actually "into" him.

Indiana's not a great team, but they did nearly knock off Michigan in the Big House, and whatever they had in the tank for that game is likely more than what Virginia had against the Tar Heels. If past trends are any indication, Groh will eventually rouse himself from his Ensure coma and win just enough games to keep from getting fired, but it's still a little early for that yet. Take the Hoosiers and wait to bet on Virginia until they play someone they really have no business beating; that's how this works.

RISK LEVEL 2: Buying a piece of stereo equipment that "fell off the back of a truck" from a guy in Manhattan
Alabama -6 at Ole Miss, 3:30 p.m. Saturday
Remember when "Hey, maybe Spurrier wasn't all that far off by voting Jevan Snead first-team All-SEC" was the trendy contrarian position? Ah, a different time, July. A couple months later, Snead has the third-worst QB rating in the conference (your fruit baskets are on the way, Jonathan Crompton and Mike Hartline!) and the Rebels are probably only a bad loss or two away from hanging a leftie onto the Independence Bowl Turnpike. I don't see Snead having his big redemption performance against the nation's 10th-best pass defense, nor do I see Saban losing a game like this when he knows the SEC West title is ripe for the taking. The Tide are probably due for a brain-fart performance on offense any week now, but it'll happen in a game less critical to Bama's title hopes than this one. 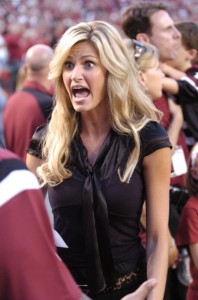 RISK LEVEL 3: Meeting Erin Andrews at a bar and asking her where she's staying
Northwestern -20.5 vs. Miami-Ohio, noon Saturday
Miami-Ohio has gone from being the proud alma mater of Ben Roethlisberger to a team that didn't even score until fourteen and a half quarters into the 2009 season; they're still dead last in the nation in scoring offense with 11.6 points per game, so if the Wildcats can even make it to 32 points (which they've done in two out of three non-conference games so far this season) they should be good to go. NU will be putting up the Big Ten's second leading player in total offense against the nation's 93rd-ranked defense, and if they find themselves still short of a three-TD lead late in the game they can always count on Miami's worst-in-the-nation turnover margin to hand them a shot at one more score. You know, Roethlisberger's going to be in Detroit this weekend, just a straight shot down I-94 from Evanston; maybe he can swoop in and save the RedHawks, but barring that, there's little reason to think they don't get rolled here.

RISK LEVEL 4: Signing any kind of treaty with North Korea
Louisiana Tech +10.5 at Nevada, 9 p.m. Saturday
Two struggling offenses broke out in a big way last week, clobbering their opponents by an aggregate score of 90-34 and totaling 911 rushing yards between them. Louisiana Tech played their game on Wednesday night, though, so they've had three extra days to rest up and prepare for the Wolf Pack; they're also sporting the nation's 13th-best turnover margin, whereas Nevada managed to lose four fumbles even in their dismantling of UNLV to maintain a per-game turnover average even worse than Miami-Ohio's. If the Wolf Pack continue to serve up the ball at regular intervals this weekend, LaTech can just aim Daniel Porter at the Nevada defense, grind away, and stay in the game just long enough to take the nation's third-worst pass defense by surprise with some deep throws. That's about the time that Derek Dooley's INTENSE FACE has been known to make an appearance, and brother, that's the last thing you want staring you down from the opposing sideline. 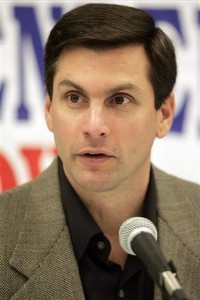 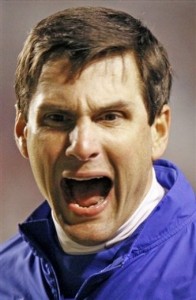 RISK LEVEL 5: Saying "surprise me" to the tattoo artist
Memphis straight up vs. UTEP, 8 p.m. Saturday
Let's don't beat around the bush here -- both these teams stink, and this game was shaping up to be just another segment on C-USA Bumfights 2: Desperate Coaches Throw Down right up until UTEP unloaded on the ranked Houston Cougars last week. But the Miners came into that game ranked last in the nation in passing efficiency and total offense, dramatically increasing my suspicion that Houston was simply out of gas after knocking off a pair of Big XII teams back-to-back. The highly contagious strain of hemorrhagic FAILfever that has been passed from Georgia to Oklahoma State to Houston is now coursing through UTEP's bloodstream, and the otherwise terrible Tigers are poised to take advantage. Oh, the final score of this game might end up 10-7, but it'll happen -- and then Memphis can be just happy enough with themselves to get blown into Post shredded wheat biscuits for the remainder of the season. Circle of life, folks, circle of life.