Welcome to our Factor Five Five Factor Preview Colorado at West Virginia. The Factor Five Five Factor Preview examines the necessaries and completely arbitraries of the official beginning of your weekend, the Thursday Night special. This week's special puts the "special" in Thursday Night Special, because Colorado is playing, and as part of their continued sponsorship of slow kids who like to play football, they will lose this game by a substantial margin. 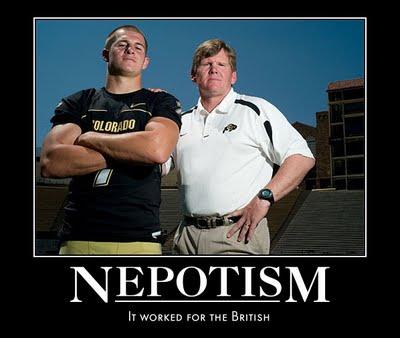 Category one: Nebulous Statistical Comparisons of Dubious Validity. Colorado's defensive numbers, presented as one would show slides of a murder, cakewreck, or explicit slides of cheap hotel infidelity in a divorce trial:

Rushing defense: 103rd ("Please note the bloodspray here, and the defendant's signature in blood on the wall."

Total defense: 101st overall in the nation. ("I believe Mr. Garner here is engaging in what we call 'A Bangkok Necktie.' Unless I'm mistaken and we're looking at a 'Polished Flugelhorn,' an exotic variant of the 'Rusty Trombone.' Care to comment, sir, or shall we settle?")

For West Virginia, that number is -2.33, their turnover margin thus far and the reason they coughed up a game the Mountaineers should have won versus Auburn. They will turn the ball over again tonight, but Colorado's defense is so inept they may not even be able to take advantage of Jarrod Brown's generosity, and will instead stare at the football like an exotic flightless bird while WVU linemen scramble to fall on it. Noel Devine could burn through two pairs of cleats tonight, and should since Aaron Opelt ran for 110 yards against the Buffs. If you're looking for Colorado's defensive line, they'll be the ones lying on the ground.

They could give them four turnovers tonight and it would not matter based on what Colorado has displayed thus far as a defense.

Advantage: West Virginia. Don't be flattered. You get this by Colorado defaulting on life.

Category Two: Mascot: Ralphie is a rampaging live animal run across the field with no fewer than five handlers barely keeping her under control at all times. So is Will Muschamp, and you don't see us giving him free points in the Factor Five. In addition to that ironclad reasoning, Ralphie helped give the world an omen about Colorado football 2009 with this debut in the spring game.

West Virginia's mascot is traditionally a burly, bearded trapper wearing an oily, perhaps still-bloody buckskin and a raccoon carcass on his head so fresh flies buzz around it. In between firing showers of oxycodone into the crowd, the Mountaineer whoops, hollers, distributes deer salad and ramp smoothies to children, and discharges his musket willy-nilly after WfVU scores. (Being hit by the buckshot is considered a blessing. Or a fatal injury. Depends on the range.)

The wrinkle this year: oh, a lady, you say? 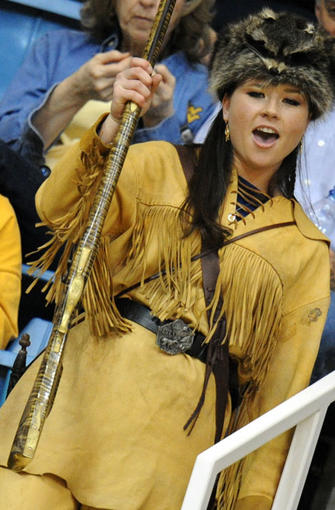 Rebecca Durst is only the second female Mountaineer mascot in the history of the school, and has been received with somewhat lukewarm reviews.

Several students complained that Durst did not wear the traditional coonskin hat at Saturday’s game, and some criticized her push-ups.

I'D SHOW HER MY PUSH-UP---we're dreadfully sorry. But she is a woman in buckskin pants and holding a gun. There are powers we can't resist, and the notion of a woman who can make fresh bear jerky and her own bathtub meth while making animal hide look good is too much redneck fantasy to decline. Blame a childhood full of watching Urban Cowboy and Dolly Parton movies, but we like our women just a little on the trashy side.

Category Three: Aura. West Virginia will be playing at Milan Puskar Stadium surrounded by a ring of roaring Mountaineer fans following a bye week, and covered by a thick smog of whiskey fumes blotting out the light of the moon above. Colorado will be playing half a continent away from home and without star recruit Darrell Scott, who has been carefully saved for use by the offensive staff at Colorado for sometime in the year 2018. (Shh. Don't tell them eligibility rules. IT WOULD SPOIL THE FUN.)

West Virginia will makes some of the assy mistakes Bill Stewart's teams make, but holy hell they're not the Buffaloes, who at times have resembled tapes of undersized Commonwealth rugby teams playing football with American servicemen for the first time overseas. The amount of butt WVU brings to the table will pale in comparison to the assstravaganza of copious posterior CU puts on the plate. Horrible football team. Horrible, horrible, horrible football team. Flames. Burning. Side of my head. Hate. So. Much...

Colorado: Maxwell Tuioti-Mariner and a few assorted exotic African names. Ironically, Colorado can't even defend this angle of the comparison, either.

Grudges? Scores to settle? Sheer cussedness? West Virginia lost this game last year in Boulder in the infamous HOW DO I MAKE TIMEOUT GAME. This face happened. 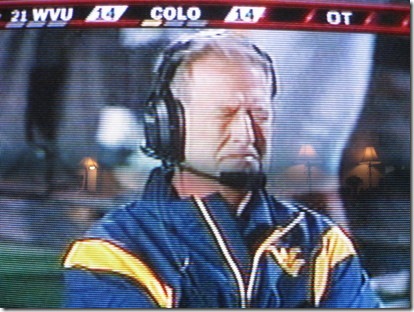 So, yeah. Bill Stewart probably wants to win this game pretty badly. So does Dan Hawkins, no doubt, but Bill Stewart's not the one who clocks his linemen with sundials at high schools and relies on the I-Ching to determine his scholarship offers.

EDSBS FACTOR FIVE FIVE FACTOR PREVIEW SUM: 5-0, West Virginia You've Been Factor'd! This should mean to bet the other way given the dismal track record of the Factor Five Five Factor Preview to predict anything at all in any way whatsoever, but Colorado is a terrible, terrible prairie mudpie of a football team.