ASK SMART FOOTBALL: WHAT DID VT DO TO MIAMI?

Share All sharing options for: ASK SMART FOOTBALL: WHAT DID VT DO TO MIAMI?

Every week Chris Brown from Smart Football takes your questions here about football and football-related game theory. This week, he explains precisely how Virginia Tech turned Miami 2009 into Miami 2008 for four quarters last weekend. Submit your questions for Chris at twitter.com/edsbs, your source for football chicanery and zombie law links since 2008. Enjoy.

I didn't get to watch the Miami-Virginia Tech game until after I already knew the outcome -- I had been at another game at the same time, and was as surprised as anyone that Virginia Tech could score thirty-one, and even more than Miami managed a meager seven. But I can honestly say that I had more fun watching this game on replay, already knowing the outcome, than anything I've watched this year.

That might come as a surprise considering I just did an extensive breakdown of Miami's (previously) vaunted pass offense, have family members who are diehard Canes fans, and still think Jacory Harris is one of the most entertaining players in the country. But you have to love what Bud Foster and Frank Beamer were able to do with Virginia Tech.

The hype was all focused on Miami; the defense had looked atrocious such that Foster was putting news clippings and reprimands on players' lockers; and Virginia Tech's speed was basically exposed against Alabama, where the Tide managed to both run through and by the Hokies.

So what did they do? Play soft coverage and hope Harris made some mistakes? Revamp the offense to catch Miami's speedy defense off guard? No. Foster and Beamer basically said fuck it, we're going after Miami. That early fumble by Jacory Harris that set up the Hokies' first touchdown? Well they did what I said they wouldn't be able to: Foster dialed up a hide-the-children, all-out, man-to-man blitz with no free safety with the cornerback, Dorian Porch, coming off the short side of the field. (Miami was in a three receiver set with a tight-end backside. Foster put two guys to this backside: one played the tight-end in man coverage and the other, Porch, just blitzed, and of course Harris never saw him.)

And the blitzkrieg was on. Virginia Tech ran the ball well enough to convert good field position into points (and managed to dig themselves out of some bad field position after a muffed punt). A big pass from Tyrod Taylor and a blocked punt and the Hokies suddenly had a 21-0 lead, one that proved insurmountable.

VT's players raved about Bud Foster's defensive plan. What was it? Early in the game, as I said, Foster brought serious heat. All-out man-blitz type heat. I didn't think VT could play man on Miami's speedy receivers, but they barely had to because the well-timed blitzes were in Harris's face before he could throw it. But Foster didn't just bring these all-out blitzes.

Indeed, later in the game the strategy was actually much the opposite, as he went to a heavy dose of cover two: funnel the outside receivers inside to the safeties and force Harris to fit a tight through between defenders. This was something Harris was never really able to do. Now, a big reason for that was when Tech only rushed four Jason Worilds simply lifted up the man blocking him and threw him to the side and sacked Harris, as he did on a key third down early in the game.

Foster's other tactic was to use the zone blitz, specifically some fire zones with five rushers and six pass defenders. He tended to do this on third and long, which put pressure on Harris and forced him to make a short throw where the Hokie pass defenders were in position to make a tackle. Again, throughout the game Harris never seemed to be in rhythm. In the first few games Miami OC Mark Whipple had done a nice job providing him with lots of pass protection and letting him take his time finding a receiver on a deep crossing route, corner route, or dig. Foster's defense -- and Bob Stoops's Oklahoma defense -- forces you to throw it quickly, and on rhythm. One-two-three-throw. Harris doesn't seem to quite have this timing down, which is probably a function of how young he really is and how he will have to get better at all his reads and learn to make them quicker, during his drop, rather than relying on sitting in a perfectly constructed pocket and just waiting for a guy to break open.

After Virginia Tech established its big lead, Foster generally went with more coverage versus blitzes, though he went back to the man-to-man blitzes late. On the interception at the beginning of the fourth quarter, he called Virginia Tech's old school "cover two robber," which is literally a cover two -- there are two deep zone defenders -- but instead of using the safeties the cornerbacks drop, while the free safety plays a "robber" position. On the play Whipple had called the same double-move play that had worked against FSU: the receiver sprints upfield, begins like an out, and then angles inside the cornerback to the post. It works great against true single-safety defenses like Cover three, because the corner will play with outside leverage. Yet this time the corner, Rashad Carmichael, had sunk inside to play the deep half and Jacory Harris basically threw it right to him. I can only guess that Jacory thought he'd be playing with outside leverage. 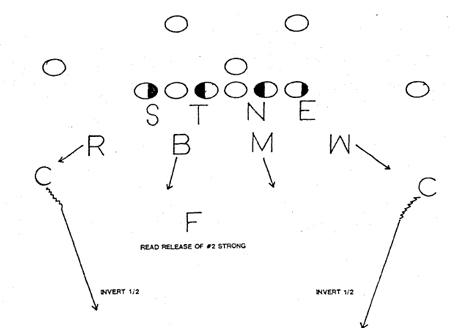 Yet to some extent this beside the point. The plan for VT was very good. But in watching this game you couldn't help but get the impression that one team was excited to play on that sloppy field, in driving rain, in that muck. They were excited to fly around and smash somebody, slide around a bit, and get up and do it again. And the other team? Well, for much of the game they looked like they didn't want to get dirty. And if you play that way, in that weather, against a Frank Beamer team, it'll be a long day. And it was.