Mike Leach has issued an edict that the crew of the Red Raider shall not, under any circumstances at all, tweet. This follows the linebacker and leading tackler Marlon Williams tweeting about Leach not being on time, which is definitely not the way to tweet about you coach. Williams would probably still have a Twitter page if he'd taken the Pete Carroll Tweeting Forever: Living Like a Champion in 140 Characters or Less pamphlet to heart (a publication with 140 character chapters, of course.)

Or he could have done something like this if he was going to tweet about his coach: 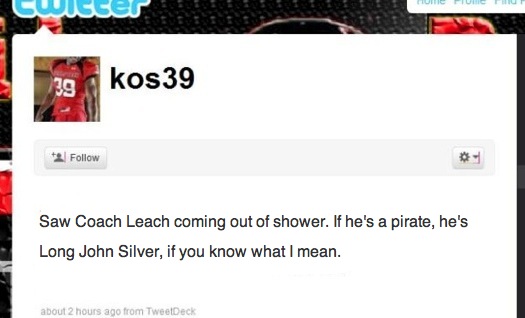 Now that Leach and his pirate navy of grad assistants have blockaded his players from Tweeting, we won't find out the fate of Brandon Carter from his Twitter feed, which also disappeared after Carter posted about his dissatisfaction with the beginning of the season. Carter posted he was suspended, a suspension confirmed by Mike Leach in terms so icy a hitman might cringe at them:

Asked how much the offensive line will miss Carter, Leach said, "Not at all."

Don't fall off the side of the boat, Red Raider. Ships don't have brakes, and it's a long way to swim to Aruba if you're tossed off the side "accidentally."