A BRIEF NOTE ON TIM TEBOW AND CONCUSSIONS

Share All sharing options for: A BRIEF NOTE ON TIM TEBOW AND CONCUSSIONS 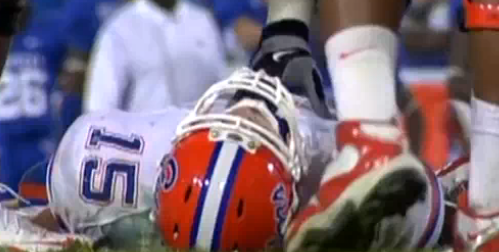 You may have come here for hyperbolic hyperventilation on the Baby Rhino falling cerebellum-first into a knee and bruising his brain, but there's plenty of other places for that. We would prefer to be a bit more literally clinical about it and just say that if Tim Tebow has a concussion, he should sit out the necessary amount of time, even if that means missing the LSU game and others.

On review, it's a clean hit, bad fall, worse impact with knee, and a medical condition he'll deal with for at least the next three to four weeks. When/if he takes the field against LSU, he will not be fully recovered. That is not supposition. That is medical fact, with a return to the field that soon going against the emerging consensus that concussions should be treated as injuries with a long time frame for recovery.

The important distinction is that a concussion is an injury to the brain. It is not a kneecap: it is the brain, an irreplaceable object containing everything you are as a thinking person, an organ of complexity mystifying the smartest people in the room for centuries. It does not respond to training table's attentions. It does not get game-ready with a cortisone shot. It needs the most expensive treatment possible to heal: time.

He will probably be out there, and it will be a bad example for the kids he hopes to reach with the scripture painted onto his eyeblack each week. When they suffer a concussion in their high school football games, what template will they use for making a decision? Or worse still, what example will their coaches urge them to use? Someone like Tebow, most likely. This is what you might call a teaching moment. We hope he chooses the lesson that it is just football, and that sometimes discretion is the better part of valor. Simultaneously, we are not optimistic about him making this choice.

If Tebow has suffered a concussion, and is genuinely concerned about setting an example for the people he wants to reach, he should let John Brantley start against LSU. That is not meant to be an emotional plea. If anything, it is as cold and logical a call as one could hope to make. The sort of statement one makes when you use your healed, rational, and firing-on-all-synapses brain looking at the evidence-based prescriptions of medical science. (Exactly the kind of decision he and other football players will not make.)