Share All sharing options for: THIS WEEK'S FOX: KENTUCKY

Kentucky is this week's fox, as the Duke of Wellington used to describe the opponent just prior a battle. He had his vanquished foes wrapped in foie gras and cooked in puff pastry after their defeat. He was a serious man. 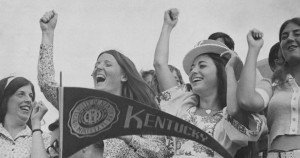 Beautiful ladies of Kentucky cheer on the team from atop their gorgeous steeds. That came out sounding more salacious than we wanted it to, actually.

The Fox has the following advantages of terrain, behavior, and natural ability. This is a road game, but not like a "Frodo-stepping-into-Mordor" road game. Kentucky is an underrated game environment by definition, largely because no one bothers to rate it in the first place, and because the locals come to the game to socialize, are quite friendly and generous with their bourbon, and do not flinch when you bring a horse into the stadium.

For reference: equine seating available on a first-come, first-ride basis. Mucking is provided for a service fee. The University of Kentucky is not responsible for any injury resulting to rider or horse during course of a game. (See case of "Hungry Jared Lorenzen vs. Owners of Neigh, I Say!" Kentucky Civil Court, 837.723.92a, Sec 43 Commonwealth of Kentucky Civil Code.)

Kentucky also has a quarterback who won't attempt to play outside of himself--we're looking at you, Jevan Snead--a piece of versatile trouble in the form of wide receiver Randall Cobb, and skilled cornerback Trevard Lindley, who could give Florida fits in the manner Eric Berry did for Tennessee last week. The lines are respectable. The coaching on the offensive side of the ball and at the top are both crusty and wily in a good way. Respect is deserved, most especially coming off a 31-27 rivalry victory over Louisville.

Add in Florida's outbreak of bacon plague, and Kentucky does enjoy certain natural advantages in this game. Don't snicker: they do. The only downside to playing a team with the flu is your team getting it afterwards. There's not enough bleach in the world to make a linemen blowing snot on you for four quarters sanitary.

Natural Advantages the Hunter May Employ Against the Prey. Special teams, first and foremost, the same brick Florida threw in Kentucky's face early and often in blocking two punts, putting Kentucky out of the game in the first quarter of a game. Second, Florida's need to bust out offensively, something Urban Meyer has to have harped on this week after watching Steve Addazio do his best impression of Spread Option Mike Debord the past few weeks. (Correction and apology: at least Debord would throw deep.) If Deonte Thompson is healthy enough to run a nine route, a nine route shall be had. If not, you may start seeing some alien names working the wideout spot, including Frankie Hammond, Jr.

The defense should limit Kentucky to their worst production of their season, but watch to see if Wondy Pierre-Louis plays a snap against Randall Cobb due to a mismatch in the nickel package. If Cobb scores a 50 yard TD in this game, it will be because of something Wondy Pierre-Louis did. We would wager infants and gold bullion on this. If you need to find Pierre-Louis, he will be the one celebrating a successful defense of a pass thrown twenty feet over the Florida bench into the stands.

The Fox Will be Subdued in: Three quarters, especially if the flu continues to ravage through the Gators, Tebow continues to find his rhythm (remember, it took him until week four to find stride last year,) and the playcalling continues to resemble a 2004 Big Ten offense thrown into a spread option wrapper. This will not be 63-5, but the talent differential should crush any chance of Kentucky surprising Florida with the UFIA of an upset. (Read this on Sunday for fun when Florida turns the ball over eight times in a 27-24 Kentucky victory for fun!) More important for Florida will be a consistent and complete performance, something need to put together in a conference game with a quickness.