Share All sharing options for: ANOTHER REASON RICH BROOKS RULES SO HARD 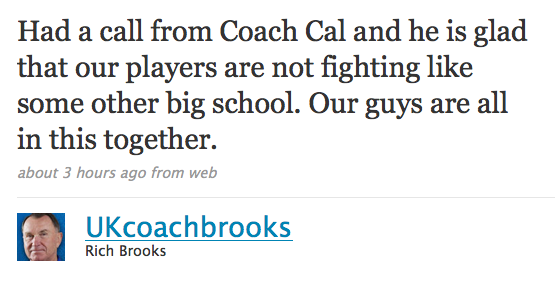 He stared out the window. Miami. Again, Miami. He came to all the places in his life by accident except Miami. He drank the whiskey from the glass. It was good. Four cubes of globe-shaped ice died to make this whiskey as good as it was, he thought. Like four decades of life spent chasing dreams that wore pretty dresses and told even prettier lies once the lights went off. He drank the whiskey. Because it was good.

The breeze blew through the windows. It kissed his cheeks like a whore kisses a schoolboy. It passed over the bed.

Oh, well, he thought. You can always find another one, he thought. Another one to tell pretty lies. Another one who was always sick, either in the heart or in the head. Another one to leave you with an empty bed and the mistress in the bottle who always stayed faithful. He would have cried if he had tears. He was past that now, though. He looked out at the beach and saw an ocean. It was full of dead sailors' tears. No shortage of those, he thought.

He drank the whiskey, which was good, and thought about ordering some eggs. He was in need of a clean white shirt and a dirty brown woman to samba away the night with while the stars looked down on them without pity or judgment.

--From Rich Brooks' third person autobiography, Rich Brooks: Life's a Bastard Chasing After Bitches In Love With Other Bastards So You Should Just Have a Grim, Relaxing Glass of Scotch. This is your weekly reminder that life is pain, and Rich Brooks is a fucking badass. (HT: SB Nation.)