Share All sharing options for: SMART FOOTBALL ON HOUSTON/TEXAS TECH

Every Wednesday Chris Brown from Smart Football lowers his IQ by hanging out here and deconstructing the football issues of the day. This week's fox, hunted down via Twitter: What the hell are Houston and Texas Tech going to throw at each other in this week's most likely candidate for betting the over successfully? Submit your questions to Chris via the EDSBS Twitter account, twitter.com/edsbs. Enjoy.

The detestable Mr. Leach will run the same play until you stop it, sir.

If actions speak louder than words, then the biggest proponent of Mike Leach's Airraid offense might be the Bob Stoops coaching tree. While defensive coordinator at the University of Florida, Bob Stoops said there was only one school in the SEC that he truly felt he had a difficult time defending, in a way not at all commensurate with the relative talent between that school and his: The Hal Mumme led Kentucky Wildcats. When Oklahoma hired him to be its head coach, he hired Mumme's offensive coordinator, some guy named Mike Leach.

Leach left after a season at Oklahoma to become the head coach at Texas Tech, and so, from 2000 on, Leach and Stoops have faced each other every year; OU's defensive coaches have up-close and personal experience with Leach's offense.

So it was a compliment to Leach and his offense that former OU co-defensive coordinator and Bob's brother, Mike Stoops, facing a possible firing after a few lacklaster seasons as head coach of Arizona, did what his brother had done before him and hired away the offensive coordinator of the Airraid system. That was Sonny Dykes, who had begun his coaching career at Kentucky under Mumme and Leach.

And history repeats. The University of Houston's head coach, Kevin Sumlin, is another Stoops disciple. From 2003-2007 he served in a variety of capacities at OU, including tight-ends coach, wide receivers coach, and co-offensive coordinator with Kevin Wilson. But when Sumlin was hired to go coach the Cougars did he hire any of the coaches that had been with him at Oklahoma? Did he go out and get anyone else from the Big 12 or around the country? Nope, he went out and plucked another twig off of the evergreen Airraid coaching tree, Dana Holgorsen, who had been co-offensive coordinator with Dykes and who traced his Airraid pedigree back to his time playing wide receiver under Leach and Mumme at Iowa Wesleyan college in the early 1990s and coached under them at Valdosta State in the mid-1990s. The results -- 5,000 yards passing for Case Keenum last season, a big upset win over Oklahoma State this year -- have been as expected.

I know I talk about Leach a lot, but this is one of the reasons why. When the Stoops-clan, the folks who (a) have to prepare for you every year, and (b) have actually had pretty good success against you, continually hire away guys to emulate what you do, then that is the biggest compliment that can be paid. And make no mistake, Houston runs the Airraid offense. It is Dana Holgorsen's show. When asked this week about the differences between what he does at Tech and what Holgorsen and Sumlin do at Houston, Leach could only say, "They’re into motion more than we are. They motion players around some."

But there are differences between the two offenses. In the same Q&A, Leach added that adding that Holgorsen "was always kind of a sharp and insightful guy, good student of the game. Very good X and O coach," and, like any good coach, he has put his own spin on the Mad Scientist's concoction. And these differences are fun here because they can highlight how there can be different but equally viable approaches.

As Leach mentioned, the formations and motions are the most obvious difference. If the plays themselves are basically the same (and they are), how they get into them can be different. Leach famously uses really three main formations, with a few others sprinkled in for effect. A spread formation with two receivers to each side, another with three to one side and a single receiver to the other, and a two-back shotgun formation with three receivers. This does two things. One, all the players spend a maximum amount of time running the same route from the same spot. As the Airraid guys famously explained, their theory is that you cut a guy's reps in practice in half if he has to practice a route from opposite sides of the field, and the quarterback has to learn to throw it to him on both sides. Instead, he can just master that curl route from the left side, every time. (The Indianapolis Colts have subscribed to this same theory with the uber-detailed Peyton Manning.)

Houston takes the opposite view, using a sort of Mike Martzian barrage of formations and motions yet running the same few concepts for his players. Adding to this is that Houston is far more up-tempo than Texas Tech's methodical captain; Houston looks to get to the line quickly and cause confusion for the defense.

Schematically, there aren't many differences, but there are some. Both teams use the major "Airraid" pass concepts like shallow cross, Y-stick, Y-cross, all-curl, and the like. But Leach's offense is predicated on the horizontal passing game -- not only those quick, short lateral throws, but his receivers frequently begin their routes not upfield, but laterally to the flat or across the formation. For example, Leach's favorite play is probably "mesh." 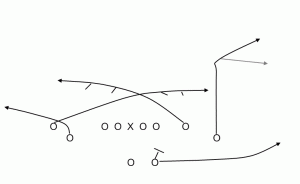 In this play, Leach gets a few things. He gets a zone-stretch on the frontside with the corner route, the crosser coming from the backside, and the runningback in the flat -- a triangle read. The corner route can also flatten out if the cornerback plays soft coverage. And against man-to-man the crossers will rub (pick?) the defenders. Note too that these crossing receivers have a lot of freedom to settle against zone. (The coaching point is they watch the man covering the opposing crossing receiver: if a defender follows the other guy they know it is man to man, if the defender sinks back it is zone. Crafty.) It is a very good utility play, and Leach runs the hell out of it. Against Texas, Texas Tech scored one of their touchdowns by calling this same play every single play of the series. I'm dead serious.

But Holgorsen isn't a huge fan of that play because of these "horizontal" routes. The reason is that they give away much of the game ot the defense right away; within a second of the ball being snapped, the defense knows who is going to the flat and who is running a shallow cross. Indeed, the very well coached teams can actually pattern read -- not only do they know guys are running short, they know it is the "mesh" play. Now Leach can still cross them up by using "tags" or individual route adjustments on the play (like sending the guy on the corner route to the post and having the runningback run a "wheel" or flat-and-up to the sideline) or simply because the receivers have freedom, but Holgorsen prefers not to go there. Instead, though he uses the horizontal passes, the focus is on "vertical stems," meaning plays where the receivers burst straight up the field to begin with. This has the advantage of destroying pattern reading: if receivers run up the field on every play, the defense doesn't know if they are breaking in, our, or going deep -- they all look the same.

The "flood" raineth down completions and yardage. Embiggen, clicking, do.

In this vein Houston probably runs the four-verticals concept more than anything else, and when they want a change-up they just tag an individual receiver. The downside of all these vertical stems is that Houston has to be a little more aware of possible blitzes because they have to adjust; in Leach's scheme, there is usually a guy "built-in" to the route who should be open against the blitz.

But again, these are minor details. This should be a fun game for those who like offense, and for those who want to both see the Airraid offense in its purest form and how Leach's disciples put their own spin on it. I think it's definitely worth watching. Like Kevin Sumlin, I know a good thing when I see it.

Chris Brown writes Smart Football like a X's and O's guerilla. Read it. Submit your questions for him at twitter.com/edsbs.