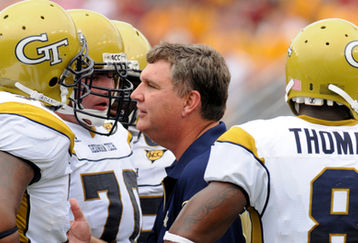 Okay, huddle up. I want you to listen to me. I hate every single one of you right now.

Pop quiz! Which of the things below were things Paul Johnson actually said about Georgia Tech's performance this past Thursday against Miami:

1. "We’re not really good at anything right now."

2. "It was very poor technique. I don’t know what the guy was doing, really."

3. "It's not legal for me to choke a player to death with his own intestines. I couldn't do it, anyway, considering how gutless we are as a team."

4. "If you can’t go on the snap count — the other team doesn’t have anything to do with that. That’s you."

6. "We had too much in. Anytime you can’t do what you’re supposed to be doing, you’ve got too much in."

7. "I shot every tenth man after practice and donated their bodies to science, but had them rejected by the morgue due to lack of spine."

8. Of coordinator’s Dave Wommack’s assertion that his defenders will switch to a 4-5-2 alignment for Saturday’s game against North Carolina: "We could play a 4-12-9, but it won’t matter what we play if we don’t get our face on somebody and our eyes where they should be."

If you answered "all of the above," you'd be correct, though Paul Johnson actually only said 1, 2, 4, 6, and 8 in a press conference we'll go ahead and describe as "honest, and profoundly uncomfortable. " We're sorry we disappointed Coach Johnson, and we're sitting five miles away, cannot play football, and had nothing to do with the Miami debacle.