Share All sharing options for: GINGER NINJA HAS FLU/FLY-LIKE SYMPTOMS 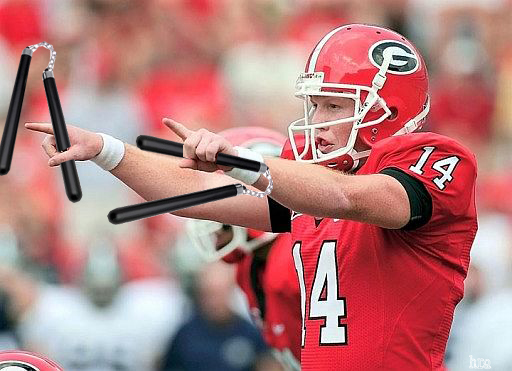 The Ginger Ninja has flu-like symptoms, according to Mark Schlabach, whose bond ratings re: Bulldog sources and info are A++ locktight awesome and solid. It's not clear whether he traveled with the team, or whether he began sprouting unusually thick back hairs, having a lot more sex with his girlfriend, and breaking rubes' arms in arm-wrestling matches in seedy bars. Ah, fun with typos. You never disappoint an English major.

The Ginger Ninja confuses enemies with explosive powders and cold, clammy sweats, though! When Joe Cox savages Oklahoma State's secondary on Saturday night and steals the sacred scroll Mike Gundy gets his crazed rage from, you'll know he's struck again with his mighty plague-chuks. The obvious answer to his absence from the team plane on the way to Stillwater? He was there, but you couldn't see him, because ninjas are invisible, especially Ginger Ninjas, who are close to transparent to start with, after all.