Welcome to our Factor Five Five Factor Preview of South Carolina at North Carolina State We reintroduce the most superficial, capricious, and altogether specious preview available in college football, the Factor Five Five Factor Preview, brought to you this year by Turfman's Products for Men, fine providers of essential masculine living products such as Turfman's Leisure Scotch for Men, the only Scotch approved by the FDA for use while biplaning, conceiving children, or simply taking the family truckster for a spin across the block. Now with convenient nipple-cap for easy sippin'.

Category one: Nebulous Statistical Comparisons of Dubious Validity. For South Carolina, the number is 2.9 yards per carry on the ground, their average for 2008 and indication of a serious vitamin B(adass) deficiency along the line. Also five, as in five starters returning for a defense that, Florida game excepted, was passably excellent last year. The chances of that happening again are minimal, especially now that they sail without Captain Munnerlyn in the secondary.

Also, their starter is hilariously ball-insecure, threw for 6 TDs against 8 INTs last year, barely completed 50% of his passes, and has a floating Matthew McConaughey on his shoulder at all times.

For NC State, the number will be two, as in fingers sophomore Russell Wilson can see when you hold them up in front of his face.

Wilson was knocked out of this game last year with a frightening knee to the head. Durn.

...and missed the Rutgers game due to injury, as well. Wilson is their offensive centerpiece, and tidy with his business too. Think of him as the anti-Steven Garcia, a ball-secure 17-1 in his TD/INT ratio, a solid runner when he has to be, and everything Tom O'Brien craves in a quarterback. bland, efficient, and admirable production, meaning Russell Wilson is the beige Altima of quarterbacks.

This game was a crapfest for the first half last year with South Carolina taking a 3-0 lead at the half before disgorging 31 points in the second half as NC State lost all will to exist. It also helps that Spurrier shuffled quarterbacks until Chris Smelley clicked, which didn't last long but hey, a half is a long time for the OBC and his Adderall-quick touch with the qb hook.

Advantage: NC State, unless Wilson gets slobberknocked out of the game.

Category Two: Mascot: Cocky is the hoop-skirted Carolina Gamecock mascot with floppy mascot bill, the primo spot leading the team out of the tunnel, no matching spouse to weigh down his free-cockin' style, and just enough killer glint in his dead mascot eyes to make you a bit uneasy. 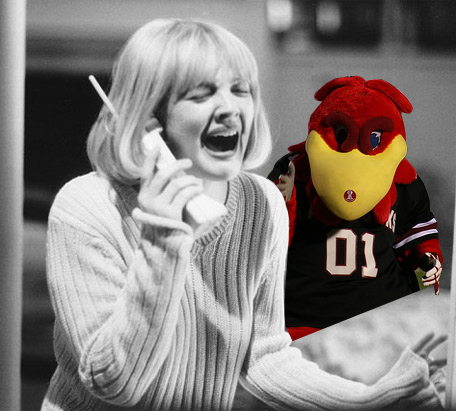 He's right behind you.

The Wolfpack, meanwhile, has Mr. Wuf, who has a matching mascot spouse in Mrs. Wuf. They sit at games and silently resent each other's influence on their life. Mr. Wuf could have gone to med school, sure, if he'd just gotten his shit together and not been distracted by her endless home improvement projects and pipeline of constant nag. Mrs. Wuf stews silently over his wandering eyes and that spaying he insisted she get a few years back. Together, their constant low level of marital discord makes everyone around them uncomfortable, and gets the cops called to their house twice a year for "disturbances."

Category Three: Aura. Year five--yes, year five--of the Spurrier era is on paper the worst yet. Dodgy quarterback under center, shaky defense, no obvious playmakers on offense, and a head coach sinking deeper into the throes of an obvious and public 3/4 life crisis. DE Clifton Geathers', arrested last week for scuffling with a bouncer, sums up the state of the South Carolina football program:

NC State, meanwhile, finished with a robust series of performances to end 2008, returns with a depth and experience they clearly lacked last year, and unlike South Carolina has only a one year streak of opening the college football season on national television with excrescent performances. (The 2006 15-0 SC/MSU opener was a heaping crap-pile, a rugby scrum of a game with no visible signs of offensive coordination whatsoever. But a victory!) They have the more dependable quarterback, return seven on defense, and are playing at home. If you can count on ACC fans to be enthusiastic at any point in the season, it is at the beginning before they are distracted by basketball.

Category Four: Names. Ulysses Tuft, Jr is really the only competition NC State can offer to South Carolina, who year in and year out brings a bushel of quality monikers to the tussle:

...and as if you were not already convinced....FOXY FOXWORTH.

Grudges? Scores to settle? Sheer cussedness? A 34-0 embarrassment last year is fuel enough for NC State, but this can't possibly be a beatdown, since the default score for any ACC victory is 24-17, and Tom O'Brien has an aversion to scoring over thirty points in a football game.

EDSBS FACTOR FIVE FIVE FACTOR PREVIEW SUM: 3-2, NC State You've Been Factor'd! Reminder: THIS MEANS BET ON THE OTHER TEAM. It's like magic: whichever way the Factor Five Preview bends, you should probably flow the other direction. Also, as bad as South Carolina has looked on opening night, they usually save their really bad performances for later in the year and take care of business on First Thursday.