Share All sharing options for: MAD WAGERIN' WITH FREE MONEY DOUG, WEEK ONE

Do you like gambling? Of course you do. For entertainment purposes only, we now provide your choice picks for the opening weekend of actual live football. Yes, actual live football where you could, in a crazy hypothetical world not of our universe, place money on the results of various games. You wouldn't do that, either, just like you wouldn't sometimes lick your finger after scratching your ear just to remind yourself how bad earwax tastes, or masturbate in the bathroom at work. No, of course not. So, enjoy, but only in a hypothetical manner, of course, as Free Money Doug takes you through your fun bets that cannot be made in real life for cash money because that is illegal thanks to nannying Baptists who will die and miss all the fun stuff in life.

The only thing more surprising than Bowling Green firing Gregg Brandon (44-30 at BGSU, 2-1 in bowls) last season was whom they replaced him with: Dave Clawson, last seen yanking out the last Jenga block that toppled the Phil Fulmer regime at Tennessee with his overly complicated (for Jonathan Crompton, at least) "Clawfense." 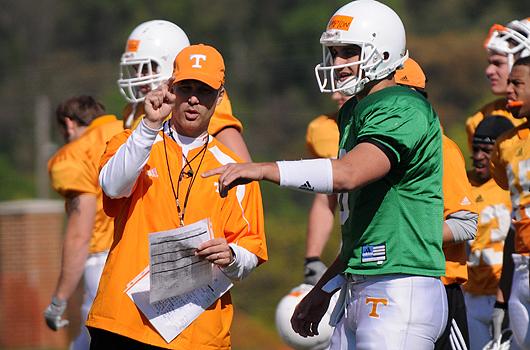 "You need to miss three reads, then fumble." "Right, fumble, then miss my reads."

Installing that system at BGSU should cause somewhat fewer problems, given that it's at least somewhat similar to what Brandon and Urban Meyer before him were running, but this is still not an offense I'd be stacking my fondest hopes and dreams behind. Nor is their defense, which returns only three starters, one I'd be counting on to stop a Troy attack that brings nearly all of its top skill players back from 2008's Sun Belt title campaign.

The Trojans have made a habit of putting up healthy margins of victory against non-BCS opponents the last couple years, even when they've gone on the road, and I expect them to do the same to open the '09 season.

RISK LEVEL 2: Telling your girlfriend "Yes, you do look fat in those pants"

OK, I take back all the jokes I've made about Buckeye fans pooping in styrofoam coolers and needing to be tear-gassed to be kept in line: The Bucks are making a truly classy move by honoring the Naval Academy with a standing O before this weekend's game to thank them for their sacrifices on behalf of our country. That'll be the first gracious thing tOSU does at the Horseshoe on Saturday; the second will be screwing around and letting Navy stay in the game for two or three quarters.

The Bucks are only 1-3 against the spread in non-conference home games over the last couple years, 5-6 over the last five, and will have two more factors counting against a blowout margin on Saturday: First, they'll be facing Navy's difficult-to-defend (and rarely encountered) triple-option attack, and second, they'll almost certainly be looking ahead to next week and the opportunity to score some revenge against Southern Cal in the 'Shoe. Of course, Terrelle Pryor could always bust out and make a fool of me here, but counting on a Jim Tressel offense to put up eye-popping numbers still sounds like a bad idea to me.

RISK LEVEL 3: Buying an American car in its first year of production

As big a risk as you'd be taking by betting on any WAC opponent at L.A. Coliseum, Pete Carroll is taking a bigger one by starting a true freshman in the season opener for the first time in USC history -- and not just a true freshman but one who threw picks in summer practice like they were going out of style. Yes, interception-happy young'un Matt Barkley will have the luxury of going up against a typically mediocre WAC defense, but like the Buckeyes, the Trojans will have the added danger of looking ahead to next week's battle royale in Columbus. This game looks a lot like the Trojans' 2007 opener against Idaho, which directly preceded a much-hyped trip to Lincoln to face the Cornhuskers; even behind QB John David Booty and 15 other proven starters, the Trojans loafed to a secure but hardly memorable 38-10 victory. I grant you that betting against Pete Carroll under any circumstance is taking your life into your own hands, but every once in a very long while the circumstances seem to tilt against a ginormous USC blowout, and this looks like one of those times.

Somebody in Vegas must have a lot of confidence in what Lane Kiffin brings to the table, because I was unaware that the Tennessee offense in its present state could score 30 points period, much less beat someone by that many. In fact, they only did that twice last year: Once against a UAB defense that finished 107th in the country, and once against Mississippi State, which required the assistance of a pair of fourth-quarter pick-sixes. Make no mistake, Western Kentucky is going to stink on ice this year, and I'm sure Lane Kiffin will be making every effort to run up the score as much as possible, but 30 points? Sorry, that's just way too much cheese given that Jonathan Crompton doesn't appear to have mastered even the center exchange just yet. Plus you have to factor in a couple of points in WKU's favor given the feelings of discomfort, anxiety, and paranoia that will surely be caused by their mascot looming on the sidelines throughout the game.

RISK LEVEL 5: Standing up at a press conference and asking Nick Saban if Greg McElroy is a virgin

Everyone who went to a bowl last year, step forward! . . . You stay right where you are, Auburn. Once upon a time, any team with a floundering offense could get well simply by throwing LaTech on the schedule, but third-year head coach Derek Dooley has succeeded in hauling LTU's defense up from dead last in the nation in '06 to a somewhat more respectable 74th last year, and he's got 16 starters returning from the team that went 8-5 and won the Independence Bowl. They were also 1-0 against the SEC, beating Mississippi State at home in their opener, and while they have to go on the road to face Auburn this weekend, can anyone state with absolute confidence that Auburn's offense, with Chris Todd starting under center and their third new playbook in as many years, will be any better than State's was last year? And if you think even Gene Chizik can't lose a game like this, tell that to Kent State and Northern Iowa, who got Chizik off to an 0-2 start in his brief tenure at Iowa State (both of those losses coming at home). Yes, all this aside, a LaTech upset is still a long shot, but Derek's parents, Vince and Barbara Dooley, are both Auburn grads, and I read in the paper the other day that even they will be rooting for LTU this weekend. The article said this was at Barbara's insistence, and she is not a woman to be fucked with.