AARON HERNANDEZ WILL NOT BE AN ISSUE BECAUSE HE IS AWESOME

Share All sharing options for: AARON HERNANDEZ WILL NOT BE AN ISSUE BECAUSE HE IS AWESOME

Florida does have to replace receivers this year, an inescapable fact of roster turnover explained away by most with a quick "infinite supply of fast guys skip to next topic." Louis Murphy, though, is not easily replaced; neither is Percy Harvin, and the loss of both field-stretching passmagnets means performance will have to improve across the board for David Nelson, Deonte Thompson, Riley Cooper, and even for newcomer Frankie Hammond, who had a stellar spring and could vie for serious upwardly mobile playing time sooner rather than later.

One known and demonstrably awesome quantity, though: Aaron Hernandez, TE and part-time acrobat. 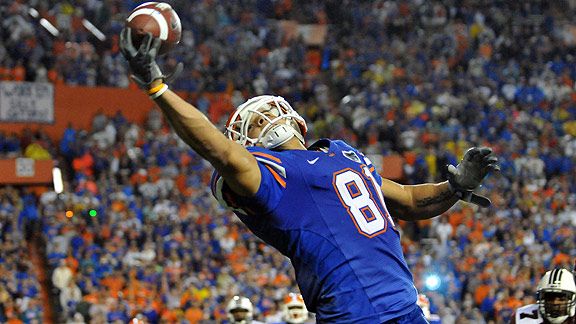 Aaron Hernandez could catch a greased pig fired from a howitzer and hustle it to the endzone without harm. He is a multifactorial mess for a defensive coordinator, a tight end in a spread system that an offensive coordinator can flex all over the formation, either out wide or from the slot. Hernandez also catches shovel passes from the backfield, slides in motion to matchup against overmatched DBs in single coverage wherever, and at 6-2, 250 still manages to disappear temporarily in the endzone only to pop up on the receiving end of jump passes and play-action scores. Meyer seemed to be breaking him in cautiously last year over the course of the season, but Hernandez's breathtaking skills in the air and pickpocket hands make deep balls nigh-indefensible and crossing patterns murder once he gets his bulk up to speed. He will be the default receiver for Tim Tebow, and will be happy to usher passes wherever the Christback wishes him to go, for he is here to serve. There are concerns, but he's not one because he is awesome, perfect, and fearsome, and we will hear nothing to the contrary.

Also, he's from Bristol, CT! You won't hear that a thousand times this fall, will you?