Share All sharing options for: JIM LEAVITT'S BALLOT FEARS NOT EVEN LOGIC 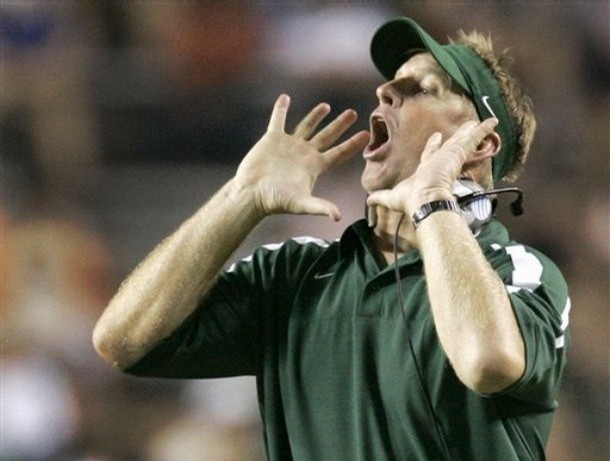 INVIZIBUL GRL ON SHOULDERS. If you questioned the future integrity of the coaches' poll, well good for you, Mr. Suspiciousness. The original Mr Suspiciousness in this case, Andy Staples of SI.com, has been wondering out loud what kind of skullduggery might result from coaches' ballots going secret in 2010 (something that might not even be legal depending on your state's legal codes, but that is a whole other mailbox full of hornets for you to put a speculative hand into, lawya.)

Troy Calhoun, Brian Kelly, and Jim Leavitt have already sent Staples their ballots in requests for this year's ballots, and it confirms what you might think: if you coach football for a living in a BCS conference, and spend every waking hour breaking down film, doing interviews, recruiting high schoolers, and doing the myriad other things a football coach has to do in the course of a day, that leaves you with very, very little time to watch football outside of your conference.

Leavitt's top 15 includes four Big East teams in the top 25 where the AP top 25 has none, including USF at #18. Breathe deep the intoxication of two decades of sleep deprivation, and now consider that Leavitt has Florida State at ten, North Carolina at 12, and Oklahoma replacing four of its five offensive linemen over Florida for the number one spot. Jim Leavitt fears no beast, even logic! Get in the zone with Leavitt and taste pain, AP nerd voters.

Brian Kelly's top 25 ballot is more modest, putting Cincy at 25, but still putting two Big East teams in the top 25 above the Bearcats. The Big East is not alone in blatant partisanship. Troy Calhoun of Air Force has three Mountain West teams in his top 25, something excused by the current bull market on Mountain West speculation in the AP top 25, but still spectacular in its degree, as Calhoun has TCU at #10, way, way above most ballots outside of the Mountain time zone. (His ballot is far more sane than Leavitt's, but then again, you know that before you ever looked, because Jim Leavitt is barking madness in a visor and Dockers.)

Meaning, in summary: if you think coaches' ballots in the AFCA coaches poll are flawed, partisan, regionally biased, and half-assed, you're probably right, and in 2010 you won't be able to see just how biased they truly are. (Complete of the coaches who vote in the poll is here, and it includes all three coaches mentioned above.