Share All sharing options for: JIM HARBAUGH SHALL POOP WITHOUT FEAR NOW 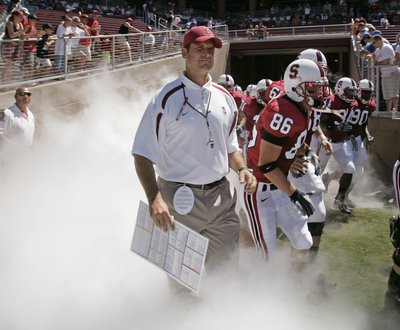 Jim Harbaugh fears no man! Digesting legumes, though, was a problem.

The Stanford coach says he had the $50-70K bathroom built on the tab of donor John Arrillaga because it "cuts down on drag." The drag came from using a shower two floors down and a bathroom located 20 steps down the hall, according to Harbaugh, but we suspect something else. Harbaugh is most likely a shy shitter, and prefers to download his Stanford Trees in his own private nature reserve where no one can hear them fall.

None of this would be any problem if Stanford hadn't given Harbaugh his own private litter box and a $1.25 million extension at a time when the Stanford athletic department was running deep in the red and cutting 20 jobs to save cash. The timing is bad, but the context is worse since this is the Pac-10, where a package like Nick Saban's private fiefdom/contract is considered heresy unless you're USC, and even he doesn't have an equivalent to the Captain Comeback Crappin' Closet:

And it’s not like Stanford was denying Harbaugh a perk enjoyed by all his peers. Among the coaches who don’t have private bathrooms: San Jose State’s Dick Tomey, Cal’s Jeff Tedford, UCLA’s Rick Neuheisel and USC’s Pete Carroll.

"Pete uses the same men’s room as everyone else,’’ a USC spokesman said.

...and when he does, it smells like cinnamon buns, happiness, and victory. Stanford opens their season at Pullman against Washington State, where Paul Wulff has to defecate in an improvised outhouse not because Wazzu is budget-deprived, but because Cougar football players stole the plumbing and sold it for beer money.