Share All sharing options for: THE DETESTABLE MR. LEACH MAKES A DEVIOUS WAGER

A fancy parlor in London where gentlemen of considerable intellect engage in bold conversation with resident curmudgeon and holder of shocking opinions, Mr. Leach. 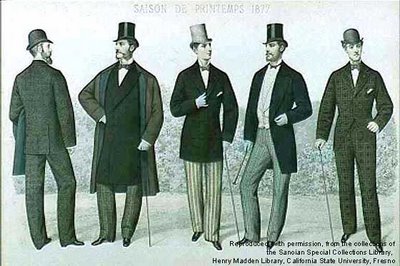 Mr. Bummercund: What brings you down this sooty avenue, Mr. Abysinnia?

Mr. Abyssinia: Only the need for a bit of the hair of the dog that bit me, Mr. Bummercund. His teeth, they sank deep last night!

Mr. Bummercund: One hopes your manservant's teeth aren't covered in any of those preposterous "viruses" the famous Dr. Pasteur of Paris claims to have conquered. You'd be in quite a bit of trouble.

Mr. Abyssinia: Ah, touche, Mr. Bummercund. No, 'twould be improbable since Buckley was run down by a Hansom cab last week. Dreadful.

Mr. Bummercund: Egads! Was he killed in the incident, Mr. Abyssinia?

Mr Abyssinia: Instantly. I was going quite fast when it happened.

Barkeep! Gin and cream, barkeep, and be a Chinaman about it if you would.

Mr. Bummercund: So, Mr. Abyssinia, let us discuss the year's wagering, if we could, yes?

Mr. Abyssinia: Traitor! Gordon and the white man's burden in two, malaria be damned. Gin and gumption over all.

Mr. Bummercund: Your charitable donation to my opium habit is appreciated. O'Leary versus bear?

Mr. Abyssinia: The bear in 32 rounds.

Mr. Bummercund: Nonsense: nothing trumps an Irishman bolstered by strychnine and this fascinating product of the New World, this CO-CAI-I-NA I have heard so much of and dearly wish to try with the money I shall take unopposed from your pocket here. O'Leary and his fearsome apothecary in 22, and I double the wager should you dare to bet on his surviving the 24 hours after the fight.

Mr. Abyssinia: Your arrogance is my pension, Mr. Bummercund. I shall keep a dusty pallet beneath the servants' quarters for you. Now, to Oklahoma State and Georgia--

Mr. Bummercund: Why, the Cowboys and their triplets will--

A newspaper snaps down. It is in Chinese. THE DETESTABLE MR. LEACH stares at them coolly from his chair in the corner.

The Detestable Mr. Leach: I would have remained silent, but I'm a sworn enemy to fatuosity in all its forms. This is a quest, not an imposition, and you shall treat it as such.

Mr. Abyssinia: Why, if it is not the very Detestable Mr. Leach, he of the outrageous theories and fabulous quotes! Come now, why trouble a gentleman over his choice of wagers? Is that not like guiding the trajectory of his Cupid's Arrow in flight on a carefree Saturday night in Whitechapel?

The Detestable Mr. Leach: I shudder to think of the syphilitic targets your arrow has struck, Mr. Abyssinia. Would you trust a fat man without a raincoat to ferry you Cathay's finest dream-powder in a London downpour, Mr. Bummercund?

Mr. Bummercund: Most certainly not, lest I get the tremors!

The Detestable Mr. Leach: Most certainly not indeed. Then why trust engage in the blind buffoonery of leaning on a team with three new starters in the secondary in a conference noted for its fusillade of points pouring from the skies like the torrents of a Siamese monsoon? Is that not like entering Ms. Barclay's House of Masculine Indulgence without the protection of a well-fitted sausage casing, Mr. Abyssinia?

Mr. Abyssinia: Why, what's the danger in that?

The Detestable Mr. Leach: Syphilis has taste for healthy brains, and when it--pardon me. In your case, no danger at all. Proceed apace. In fact, for once, I shall partake of this donnybrook and enroll in your wagering. I shall take both of your bets for the Cowboys, and see them double against these...what are they referred to in the charming colloquialism of the American colonies...yes, these "Red Raiders."

Mr. Abyssinia: And here we were thinking you the ascetic, Mr. Leach. What interest have you in this game?

Mr. Bummercund: Well, you shall rue the day you bet against a pair of formidable punters such as ourselves!

Mr. Leach: And this shall be the only time you see me punt. Only as a cat with a full gorge regrets playing too much with fat mice, gentlemen. Now, if you'll excuse me, I'm off to Whitehall to warn the Minister of the dangers of interlocking secret treaty agreements. I fear it shall lead to a war, even one might call "a World War," if unchecked.

Mr. Abyssinia: Ah, Mr. Leach. We have no greater friend than the secret treaty agreement!

Mr. Abyssinia: Oh, how I hate the detestable Mr. Leach!